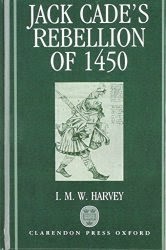 There have been few contemporary works that have dealt in detail with the Jack Cade rebellion of 1450, which makes I.M.W. Harvey's book enormously important. Cades' revolt was similar in some ways to the Peasants' Revolt of 1381. The rebels assembled on Blackheath and at Mile End, perhaps deliberately mimicking Wat Tyler's men seventy years earlier. Though a smaller, and less disciplined force, they too stormed London and attacked prosperous homes and shops. They even broke open the Marshalsea prison like their predecessors.

But despite the fear this caused in the ruling class, the revolt had some important differences. In 1381 the rebels were at the high point of a movement that was challenging serfdom as a social structure. This is why the destruction of manorial records, the documents that put the exploitative relations between lord and peasant in writing, were so often destroyed. In Harvey's book she only mentions one occasion when this took place in 1450. While the demands of 1450 are often social, for instance rejecting the Statute of Labourers, they were also inherently about reform. Indeed Harvey points out that the main demands in 1450 were actually those of the Kentish middle classes. That the rebellion mobilised a mass of the lowest orders to march on London reflects that there were real concerns from everyone that needed to be addressed. But there is little, if any, sense of a rebellion against the established order from the contemporary accounts. This is why Cade's rebellion included gentlemen such as Robert Poynings who was his sword carrier during the revolt. But the mass of the rebellion were peasants and small scale land owners.

Why did they revolt? Strangely the question of France was high on the list. While the rebellion involved areas outside of the south-east of England, it was dominated by Kent and, to a lesser extent, Essex. These were the areas most affected by the armies that went to Normandy to defend England's possessions. But they were areas also frequently raided by the French during the Hundred Years War. But this isn't enough to explain events. As 1450 approached it was clear that England was heading towards defeat and for many in England this was a disaster. Henry VI was widely seen as an ineffectual king, but anger was directed at the ministers around him. Many of these, in particular the duke of Suffolk, were also extremely oppressive land owners in the south-east. They exploited the people and the land, and distorted the criminal justice system in the interests of lining their pockets. 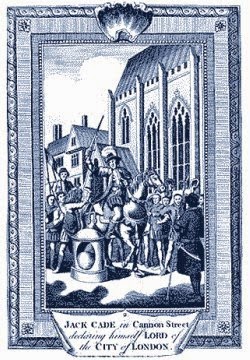 This then is the backdrop to Cade's march on London and the murder of several leading figures in the Royal household. That the king could not rely on his soldiers and fled to Kenilworth demonstrates the scale of the crisis. But possibly because the rebellion only focused on minor reforms rather than significant changes, the majority of rebels were bought off by promises and a royal pardon. Cade wasn't. He was hunted down and killed. But Henry VI's rule never regained real stability and the king was dragged further into civil war and national crisis.

Harvey's finishes by looking at the years that followed 1450. Few histories of the period have noticed the rebellion that continued in Kent until at least 1453. This was not a whole county in turmoil, but significant numbers were still prepared to rally behind the calls of new "Captain's of Kent", and increasingly they raised slogans that demanded radical change.

Harvey's book is a work of brilliant scholarly research. She has an excellent command of the source material, including the many contradictions (such as the debate over where Cade was killed). It is no surprise that almost every book dealing with the period since has relied heavily on this important study. For anyone trying to understand the backdrop the Wars of the Roses, and history that doesn't just concentrate on kings and queens, this is an important, if difficult to find book.

Thank you for your excellent summary. I have only been able to read a chapter of the book but the detailed scholarship is inspiring. A book to return to, I feel.