Christopher Dyer - Making a Living in the Middle Ages: The People of Britain 850-1520 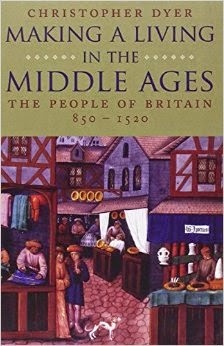 The common perception of Medieval society is of an unchanging, backward economy, dominated by a peasantry who had little influence or desire for change and an aristocracy who were the reserve of intellect and political decisions. Christopher Dyer's important book challenges these myths at every stage, arguing that we shouldn't "belittle the achievements of the past and to assume in a patronizing way that medieval people were primitive and ignorant."


Formal descriptions of medieval society imply the subordination of the masses. Yet even serfs had some use of property, and had some choice in the management of their holding of land, though they were of course restrained in many ways. One of the dynamic forces in medieval society... was not dictatorial decisions, but the opposite - the competition and frictions between different groups, not just between lords and peasants or merchants and artisans, but also between laymen and clergy, higher aristocrats and gentry, and subjects and the state, and individuals within those various groups. A society that appears to be governed by rigid laws and customs, in reality allowed people to take initiatives.

Much of this informative book looks in detail at the lives, and economic situation of different groups of medieval society as they change through the period. If at times the topics seem dry this is because of the immense amount of detail. This is not a popular history, though it is certainly accessible to the non-specialist.

The great theme of Dyer's book is that medieval society was constantly changing. Even during the later period which is traditionally seen as one of economic stagnation, there were innovations in how people lived, worked the land and organised themselves. There were also changes to social relations between different groups and classes.

In addition to the changes through time, there was also enormous geographical variation. Take agriculture,


The managers of some manors, such as South Walsham on the earl of Norfolk's estate, had by the 1260s given up fallowing entirely, and cultivated all their arable every year. Such intensive methods were adopted in north-east Norfolk, not just because the soil was naturally fertile, but also because the high population density allowed labour to be concentrated on the land, with repeated ploughing, weeding and spreading of manure and marl.

Medieval peasants and lords were extremely concerned with maximising the return from the labour on the land, and Dyer explains in detail the way this meant at different times and places thinking through the best way to use land. "The demesnes' main contribution to technology lay in the management of resources rather than in new inventions or mechanical devices... they could maintain and improve yields by finding ways to combine arable and pasture... through changes in rotation or combinations of crops".

Though we shouldn't dismiss medieval technology, which has been shown to have existed on a large scale - total English mills by 1300 perhaps surpassing 10,000 in number.

But of greatest interest here is the examination of the changing social relations. In particular the way that serfs and peasants gradually began to relate to their superior classes not through obligated labour, but through monetary relations, the paying of rent in kind. In turn we see how landowners moved away from a feudal relationship, encouraging peasants to give a proportion of their crops, and concentrated on maximising income from rents. Over many years this had a tremendous impact upon the population of the countryside, There were many reasons for this, but I was struck by the evidence that must have been apparent to every lord in the country, that those labouring for others tend to be less productive and efficient.


An average day's labour service produced one-third of a carload of hay, while a wage earner doing the same task yielded a half-cartload.... This helped them [the demesne managers] to decide that in some circumstances it was more profitable to let the tenants pay their commutation money - to 'sell' their works.... and to use wage earners instead. This decision was made in the light of the knowledge that the commutation money... did not cover the full cost of the hired workers.

But this was not a one-sided story. Dyer notes that the "aristocracy" were increasingly restricted. On the one hand the sate was limiting their ability to impose discipline through manorial courts and from below the tenants constantly attempted to strengthen their hand, to fight for their customary rights and to reduce their exploitation. This forced lords to find other ways to make money, such as building mills, which further changed social relations in the country. We must also be careful not to judge the aristocracy through the eyes of modern capitalism. They were "not just money-grabbers", status and reputation were also important. They was constant friction between them and their contemporaries, as well as other groups in society, and it was this that helped provide "one of the dynamic forces in medieval society".

External changes however had enormous impacts. In the mid-14th century England went through two enormous social crises, first major famine and then the Black Death. It is well known that this helped undermine medieval society further, by encouraging the movement of the population, driving wages upwards and leading to more lords asking rents, rather than feudal obligations. But Dyer emphasises the role of the lower orders in this change as well, writing that


the Black Death liberated the lower ranks of society; the elite were stimulated into a reaction, which soured relations and provoked rebellion. The revolts established a new balance, in which the authorities adjusted to the reality that the peasants, artisans and wage earners had improved their bargaining power. The fall in population created the environment in which these changes took place, but reduction in rent and the freeing of serfs did not happen 'naturally', The entrenched institutions would crack only if the lower orders developed ideas which contradicted those of their rulers, and asserted themselves in a coherent and organised way.

Dyer suggests that this process was much more complex that we have been lead to believe. Wages not rising as dramatically as we previously understood, but more importantly, the higher wages and reduced population changing demands for goods, which actually stimulated the economy. But the major change was not the increase in wages, or the change to labour services, but the "leasing of lrds' demesnes".


Lords gave up their role as direct producers, and the peasants cautiously accumulated larger holdings. As the masses, including those depending mainly on wages, spent their new wealth, the urban and commercial economy regained some of the lost ground and grew once more.

The crises of the mid-14th century opened up a new era for the countryside and the town that would lead to the beginnings of the rise of capitalist production in the 17th century. This is not to suggest that some areas of the economy did not go backwards, and Dyer describes the abandonment of villages and the shrinkage of the cultivated land in this period. But in countering the idea that England simply entered an total economic plateau in the later medieval period he is highlighting the importance of the changing economic and social circumstances. Dyer is concerned with not trying to find a "grand narrative" to explain all the historic changes. Noting there was not a gradual "upward march", and highlighting the way that population did not increase as dramatically as one might have expected after the decimation of the Black Death. Ultimately though, for Dyer, the key question is the "creation of an enduring framework for production and exchange in the two centuries after 850, and the urbanization of period 880-1300." He continues


The dynamic tension within the feudal regime in the in the twelfth and thirteenth centuries with its element of competition among the aristocracy and the lack of strict controls which enabled peasant initiatives, must be accorded great importance. The relaxation of demographic pressure int he fourteenth century and the opportunities that were given to the upper ranks of the peasantry enabled some growth in a period apparent adversity.... the problems for producers int he next two centuries again allowed a level of consumer demand which kept industry and trade in a healthy state especially around 1400 and again after about 1470.

It this this emphasis on the internal dynamics and the role of production in the economy that helps make this such an important book. It is not without its weaknesses (the lack of footnotes being a major complaint), though it is full of detailed information and the occasional fascinating anecdote. Ultimately through, Dyer never forgets that it is ordinary people who are at the heart of the processes that changed their world.