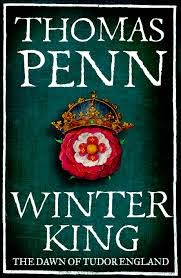 Henry VII is an overlooked English king. His great achievement was to bring stability to the realm after the War of the Roses, but he stands in the shadow of his more interesting and gossip worthy son, Henry VIII. But Henry VII's reign is a fascinating one, as is the story of how he clambered to the top. Precisely how Henry came to rule is a complicated story. He had spent years in exile and his defeat of Richard at III at the Battle of Bosworth was almost a chance affair. His victory, like those of several preceding Kings of England did not guarantee him power, indeed, as Penn points out, Henry's new position was by no means assured. Despite the "triumph and glory" of his coronation, this was a

"precarious claim to the throne, no large family clan and little hereditary land of his own, virtually no experience of government and heavily reliant on the doubtful allegiances of a group of Yorkists whose loyalties lay with the princess he now courted, there was little to suggest that Henry's reign would last long, or that civil conflict would not simply mutate again... Henry would be haunted by the specters of civil war, real and imagined. They would stay with him all his life and they would define his reign."

Civil war, or at least discontent was, indeed, a major part of Henry VII's reign. In 1497 the Cornish rose up, refusing taxes imposed by Henry in order to finance war with Scotland, war designed in part to shore up his position and his allies. Later that year, Perkin Warbeck, a pretender to the throne arrived in Cornwell hoping to ferment rebellion against Henry on the basis of the county's discontent. Both events ended badly for the rebels, though Warbeck was held in the tower of London as something of a curiosity at court before Henry allowed him to escape so that he could be recaptured and executed.

Significant sections of the book deal with that perennial preoccupation of feudal kings, their successors. Henry's clearly doted on his eldest son, Prince Arthur, who died shortly after his marriage to Catherine of Aragon. Catherine herself plays a central role in this history, effectively being little more than a bargaining chip between Henry and the recently reunited Spanish monarchy. Her betrothal to Henry's second son, who became Henry VIII, is very much a marriage of convenience for Henry's rule, but its clear that Henry junior doted on Catherine, marrying her rapidly after his ascension to the throne. Catherine's fortunes waxed and waned with her marriages, but also as the various power relations between European monarchies changed.

Initially Henry appears to have shown little interest in the day to day upbringing of his son. Later though, Henry takes him in hand, and Penn shows how the future Henry VIII was moulded into a model English king. Trained in the military arts, Henry was a keen jouster and several tournaments are described in detail. Henry VII understood all to well the importance of a neat succession and did everything possible to make sure that when his son came to the throne he was untouchable.

Beneath the surface of Henry's reign though, things were far from ideal. Finance was a continuous problem for Henry, though he amassed an enormous fortune in land, property and treasure. Those around him also could do well. In particular, his advisers Richard Empson and Edmund Dudley, made sure that controlling access to the king made them rich. But they had other ways of lining their pockets.


"Like all royal servants, their own interests blurred indistinctly with those of the crown. Showered with bribes, cash and land in exchange for 'secret labour' with the king, they took every opportunity that came their war - and proved particularly adept at doing so. Empson took bribes and fat ecclesiastical sinecures as danger money, for 'avoiding of his displeasure'; people paid him lobby fees to further their legal cases, only to discover that he was also accepting money from the other side. When the Sussex gentleman Roger Lewknor was imprisoned for murder, Dudley sold him a pardon in return for the title deeds to his estates."

But Dudley and Empson weren't simply about making themselves rich. It was their abilities that enabled Henry to bleed the rest of the country and in particualr the city,

"In Dudley's hands, Henry's tactics against the city reached fruition. He knew exactly how much the Corporation would be prepared to pay for renewal of its charters of self-government and trade privileges, and how much he could squeeze out of London's merchants in customs duties and the sale of export licenses.... As various London politicians pointed out uneasily, the king was riding roughshod over due process, changing procedures when he had 'none authority' to do so."

With Henry's death, Dudley and Empson's opponents moved against them. These two individuals had made many personal and political enemies. One of the most fascinating parts of Penn's book is how the news of Henry's death was "secretly kept" in order for the regime to be shored up, and to prevent Dudley and Empson from using their own power base to protect their wealth, positions and threaten the future succession.

Henry VIII's reign was very different, as an Italian ambassador noted, "all is milk and honey and nectar". The new king was more generous with his money and his favour, The old order was, to a certain extent, portrayed as a difficult, corrupt and dangerous time. The new order, at least according to the flunkies and poets, was to be a happier place.

Penn's book is an extremely detailed look at how the Tudor destiny was born and entrenched. Its detail unfortunately makes the book over long. It perhaps could have had 50 pages edited out. The author's enthusiasm for period detail and overlong explanation will tire even the most dedicated reader of Tudor history. That said, for those attempting to understand the long arc of English Medieval history this is a very useful work that is worth reading.