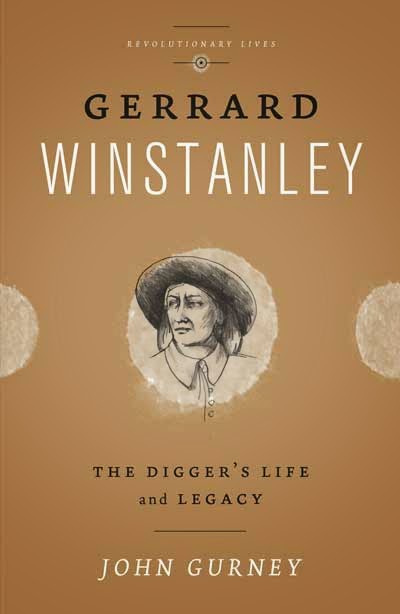 Today, most people who know of Gerrard Winstanley, remember him for the Digger's movement that he initiated - celebrated for their vision of a communal society, with everyone working for the collective interest. But there is much more to both Winstanley's life and ideas and John Gurney's book is an excellent introduction.

Winstanley's ideas were shaped by the ideological and religious ferment that accompanied the English Civil War and the aftermath of the defeat of Charles I. But the revolutionary changes taking place also brought with them difficulties. Winstanley's ideas constantly developed and grew, shaped by the turmoil around him. As Gurney points out about one of Winstanley's writings completed just days before the execution of the king,

"The New Law of Righteousnes reflected the tremendous optimism felt in radical circles and captured well the millenarian excitement of the movement. Crucially, however, it also reflected the impact of some very different developments, as a combination of grain shortages, widespread sickness and the effects of an economy still weakened by civil war threatened large numbers of people with impoverishment."

It is from this concrete situation that Winstanley's radical idea to take control of land and work it in a common interest arose. Though he wasn't the only one to think like this,

"the return of commons and wastes to their proper use by the poor became a central concern. The Leveller Richard Overton had in 1647 called enclosed or impropriated commons to be 'laid open againe to the free and common use and benefit of the poore', and this became a standard radical demand over the following four yours."

But what Winstanley was able to do was to take these ideas and "develop a coherent programme". John Gurney also shows that Winstanley's desire for change was also rooted in his own experiences. Having suffered poverty and the failure of his own business Winstanley ended up living in Cobham, where he was also party to the local class struggle. The parish had been marked by conflict between landlords and tenants for many years, as the lords of the manor, tried to undermine historic rights of the tenants. Winstanley himself was one of six Cobham inhabitants fined in April 1646 for digging peat on the common. The local priest was also lord of the manor, and all this must have left a significant impression on Winstanley, as Gurney points out,

"In his writings Winstanley would target both the clergy and lords of the manors, and it is no doubt significant that in two important periods of his life the roles of minister and lord of the manor were merged into one."

Winstanley's religious ideas clearly evolved during this period. Gurney says that we can't know the particular path Winstanley took, but we can "see him as moving from orthodox Protestant to Baptist, Seeker and finally Digger."

Winstanley's ideas developed quickly and radically. In 1648 he was already challenging the "very name of God", talking of Reason, "the great creator" who "governs the whole Creation". Some of Winstanley's writings seem an extremely radical interpretation of the Christian religion,

"For the Spirit Reason doth not preserve one creature and destroy another... but it hath a regard to the whole creation; and knits every creature together into onenesse; making every creature to be an upholder of his fellow; and so every one is an assistant to preserve the whole."

Which seems to me quite a modern, dialectical and ecological interpretation of "creation". This points to how Winstanley was emphasising "the central importance of conduct towards other, and relation of the individual to the whole, as the essence of true religion". Here lies the theoretical roots of the Diggers' attempts to run society in a more equal and just way. Winstanley's writings explore how a future society could work, considering what would happen to those who refused to work, or broke laws. Again, these ideas develop over time, and after the defeat of the Diggers' attempts to build on St. George's Hill, they become more limited and restricted. But he still had a vision of a Communistic world,

"Every Tradesman shall fetch Materials, as Leather, Wool, Flax, Corn and the life, from the publike Store-houses to work upon without buying and selling; and when particular works are made, as Cloth, Shooes, Hats and the like, the Tradesmen shall bring these particular works to particular shops, as it is now in practise, without buying and selling. And every family as they want such things as they cannot make, they shall go to these shops, and fetch without money, even as now they fetch with money."

Such writings inspired many later socialists, and helped writers like Eduard Bernstein to see in Winstanley a proto-Marxism. Which is why Winstanley's name joins a list of great revolutionary thinkers on a plinth in Moscow erected with the support of Lenin after the Russian Revolution. It is unfair to assign Winstanley to a later political movement. After-all, the history of radical ideas is of different strands developing, arguing and challenging previous assumptions and beliefs. Gurney traces the way that different movements have rediscovered Winstanley and the Diggers, how they have been inspired and used his ideas.

The defeat of the English Revolution wasn't the end of Winstanley, though his later life was far from the radical one which had brought him into contact with key figures of the English Civil War and made his pamphlets sought after reads. Gurney points out that Winstanley, for most of history, has remained an obscure figure that has only relatively recently been rediscovered. Gurney hopes that others will develop our understanding further, but his own book is in itself an important read, developing and challenging the ideas we have already got about Winstanley and helping a new generation of radicals discover them for themselves.