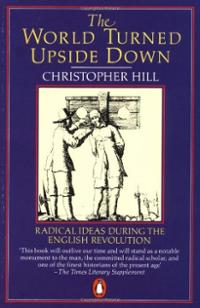 I've seen it occasionally suggested that Christopher Hill's classic book, The World Turned Upside Down is one of the best introductions to a study of the English Revolution and Civil War. I don't agree with that, but I understand why radicals often suggest it. Hill's book is not a history of the Revolution, nor an introduction to the period. In fact, without a basic understanding of the history of the era, the reader of this work might be left a little high and dry. As the subtitle suggests, this is a more specific history, that of "radical ideas during the English Revolution" and by radical ideas Hill also means the people and organisations that spread them.

One of the reasons that it is often suggested as a introductory read is, I suspect, because it has had a profound effect on so many people. Hill's coverage is extensive and his knowledge of the source material very impressive, as the extensive footnotes indicate. But more importantly the book is important because it treats the subject matter dialectically. Ideas were not static, organisations did not remain unchanged, but they grew and developed as the English Revolution itself grew and then, with the suppression of radical ideas and organisations after 1650, they changed once again.

This helps to explain a modern conundrum. Today the Quakers are a network of pacifistic Friends, yet during parts of the 1600s they were a radical religious grouping that in turn spawned even more radical ideas. Their survival into modern times is in part because of their ability to shake off their radical origins and make themselves more acceptable into the post revolutionary landscape, indeed Hill describes one of the radical founders of Quakerism, George Fox as playing "a part only slightly greater than that of Trotsky in official Soviet histories of the Russian Revolution". An early airbrushing of history.

But the Quakers, like other groups were part and parcel of a wider radical landscape, their success was as Hill points out, a result of the defeat of more political organisations, such as the Diggers and the Levellers:


"The spread of Quakerism, emptying the churches of Anabaptists and separatists, witnessed both to the defeat of the political Levellers and to the continued existence and indeed extension of radical ideas".

This book must surly be credited with the wider recognition of the existence of such organisations. Much of the radical core of the English Revolution had been forgotten until the rediscovery of many of the writings and records in later centuries. Hill's book is excellent and explaining the stunningly radical ideas of groups such as the Diggers. He avoids the temptation to suggest they were ahead of their time, pointing out in the conclusion that many of their ideas were in advance of ours. But the Levellers and Diggers were merely the tip of a radical iceberg. There were many groups and individuals who questioned society, ideology and religion in extremely detailed ways.

The Levellers didn't want to abolish private property, though they were happy to see a blunting of the rule of the rich. Other sects did want to see private property destroyed and they also questioned everything, from the existence of heaven and hell, to the idea that marriage and divorce should not be infinitely easier, or that the Bible was not the word of god. As in any period of radicalism, more open attitudes towards sex came to the fore, but in a period of history when religion invaded every aspect of love this was shocking to the establishment (and perhaps the wider population). But the theme that returns over and again in Hill's book, is that ordinary men and women are beginning to question the world around them, the structures of society and their own roles within it.

Christopher Hill is not so mechanical a Marxist to suggest that this radicalism was only driven by economic changes, he writes:

"I have tried to stress in this book the most unusual stimuli which during the revolutionary decades produced a fantastic outburst of energy, both physical and intellectual. The civil war itself, the intellectual forcing house of the New Model Army and its Army Council, regicide, the conquest of Ireland and Scotland, the Dutch and Spanish wars, physical and social mobility, the continuous flow of pamphlets..."

This an much more contributed to an immense groundswell of ideas that men like Cromwell were first to use for their own class interests and then to bloodily suppress. Hill concludes that the "tragedy of the radicals was that they were never able to arrive at political unity during the Revolution". This means that the outcome was less in their interests than it might have been. Nonetheless the radical ideas that were defeated post 1650 did not vanish for good, but became a small and influential part of wider ideas for many decades.

Hill's book is an inspiration in the sense that it shows how men and women at different points in history have stood tall and tried to understand their world and shape it. Socialists are used to arguing this about the great revolutions of the 20th century, but it was true for centuries before 1917 and 1968. It will undoubtedly be true again.