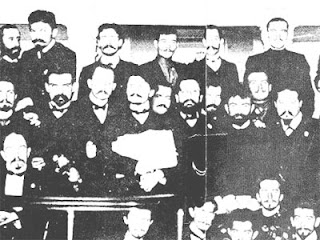 Lenin described the revolution in Russia in 1905 as the "great dress rehearsal  for the revolution of 1917 which seized power. As a result, the 1905 revolution is often hidden by the shadow of the events twelve years later. Yet for those trying to understand the dynamics of the revolutionary process, there is much to learn from 1905 (as the Bolsheviks themselves understood).

Leon Trotsky was a central figure in this revolution. His book on 1905 is not an attempt at a historical over-view. It doesn't tell the whole story what was a year of revolution - in fact he begins with the massacre of January 9th, when Tsarist troops fired on a crowd who can marched to the palace to raise a number of wide ranging demands for reform. Then he skips to the events of October, barely touching at the surface of what were many months of strikes, protests and intervention from the Tsarist state.

October 1905 was important because it was then that the great body that represented the working people of St. Petersburg - the Soviet of Workers Deputies was formed. Much of 1905 is spent analysising this body, which Trotsky was to chair during a brief period at the end of the year, before the state arrested the leadership. From Trotsky, we get a real sense of the activity of the Soviet, as well as the way that it represented an alternate centre of power to the existing bourgeois state.

"The Soviet's premises were always crowded with petitioners and plaintiffs of all kinds - mostly workers, domestic servants, shop assistants, peasants, soldiers, and sailors. Some had an absolutely phantasmoagorical idea of the Soviet's power and its methods.... Applications and petitions arrived from remote parts of the country. After the Novembers strike the inhabitants of one district of a Polish province sent a telegram of thanks to the Soviet. An old Cossack from Poltava province complained of unjust treatment by the Prices Repnin who had exploited him as a clerk for 28 years and then dismissed him without cause; the old man was asking the Soviet to negotiate with the Princes' on his behalf. The envelope containing this curious petition was addressed simply to The Workers' Government, Petersburg, yet it was promptly delivered by the revolutionary postal service."

The Soviet was also a body of action, it tried to co-ordinate and develop the workers struggles across the city and the country, launching a strike wave to demand an eight hour day, but encouraging workers to implement this in their workplaces in the face of management opposition. This was incredibly successful and in the fifty odd days of its existence, workers made many gains that had been denied to them by the repressive regime. As Trotsky writes:

"By the pressure of strikes the Soviet won the freedom of the press. It organised regular street patrols to ensure the safety of citizens. To a greater or lesser extent, it took the postal and telegraph services and the railways into its hands. it intervened authoritatively in economic disputes between workers and capitalists. It made an attempt to introduce the eight-hour working day by direct revolutionary pressure. Paralysing the activity of the autocratic state by means of the insurrectionary strike, it introduced its own free democratic order into the life of the labouring urban population."

Trotsky's book contains much else of interest - the role of the mass strike wave in revolutionary periods and the way that the masses can attempt to win over the army for instance. However the revolution was defeated, in part because sections of the army remained loyal and in part because of the weaknesses of the under-developed Russian working class. Much of the processes that would shape the 1917 revolution existed in embryo in 1905 - the alliance between workers and peasants for instance.

The defeat of the revolution led to prosecutions. The task for the Russian ruling class though was difficult, because "they had to represent the Soviet as a conspiratorial organisation which, under pressure from a group of energetic revolutionaries, controlled the terrorized masses."

Of course this was very much the wrong way, but the Tsar and his ministers could hardly acknowledge the fact that enormous numbers of workers and peasants had supported a body that had become an alternate to their government.

The edition of 1905 that I read (Wellred publications 2005) contains a lot of useful material. Trotsky uses it to expound his theories of Combined and Uneven Development and Permanent Revolution, arguing long before Lenin that a working class revolution was possible in Tsarist Russia. In later articles and footnotes he points out that his criticisms of the Bolsheviks were no longer valid as they had, in the process of 1917, moved to share his position. Additional material includes Trotsky's account of the trial of the Deputies of the Soviet and his speech in the court room, in which he displays his eloquence, political analysis and rhetoric. It also includes an account of the deputies journey into Siberian exile and an exciting description of his escape on a sleigh pulled by reindeer and a drunken Siberian driver. Sadly this edition is marred by a very bad layout, plenty of typographical errors and spelling mistakes and a couple of duplicated paragraphs. It makes the reading process much harder and would encourage potential readers to search out an alternative edition.


Choonara - A Rebels' Guide to Trotsky

Trotsky - An Appeal to the Toiling, Oppressed and Exhausted Peoples of Europe

Posted by Resolute Reader at 12:31 pm