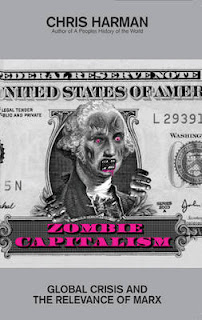 Chris Harman's last book is breathtaking in its scope and detail. Like his classic work A People's History of the World he condensed a lifetime of reading, analysis and Marxist thought to create a book that is nothing short of an economic history of capitalism, from a Marxist point of view. It is also a deep critique of the inherent problems of the system. Finished as the latest economic crisis began to bite with the failures of banks around the globe, Chris Harman's book has left us valuable ammunition with which to argue against those who believe that capitalism can be either saved, or reformed.

Harman begins this work by looking again at the basic ideas of Marx's economic thought. He takes us through the way that Marx understood that humans interact with the natural world. Our labour being precisely our attempts to shape the world in our own interests. This labour is what makes us human. Most important to this, is the Labour Theory of Value. Human labour is the most important thing about our society, as Harman explains:

"Machines and raw materials do not themselves create value. Only the exercise of human labour has added to the natural wealth that existed in a state of nature and only continued human labour can increase it still further."

Under capitalist production what happens is that this labour is used to fulfil the interests of the capitalists. Goods that are manufactured and sold, are sold at a price that allows the capitalist to "cover not only the cost of providing the labour power of the workers (their wages) and the profit of the company, but also the cost of the wood and the wear and tear [to equipment],"

The "surplus value" - the amount extracted from the workers' labour above and beyond that needed to pay them, is the core issue for a Marxist understanding of economic. But for capitalist production as a whole there is another related factor, which is at the centre of Harman's explanation of what happens to the wider system. This is the "rate of profit". This is, in its simplest terms, "the ratio of surplus value to total investment". All sorts of factors influence the rate of profit - not least the level of wages, and it changes over time and between industries. But, what Marx identifies and Harman explains, is the great tendency for the "rate of profit" to decline over time. It is in this decline, and the attempts of the capitalists to increase their rate of profit, or slow its decline that the problems of the wider system are related to.

By arguing that the falling rate of profit is key to understanding the long term crisis of capitalism, Harman doesn't ignore other factors and issues. For instance, he recognises, with Marx, the problems of declining consumption caused by the reduction of wages, or unemployment and the way that this can feed in to wider economic problems to help create crisis. Harman also explores the role of finance capitalism and the banking industry, a subject that is particularly important when trying to understand the roots of the present crisis. Harman quotes Marx:

"The credit system accelerates the material development of the productive forces and the world market", but does this through developing "the incentive to capitalist production, enrichment through exploitation of the labour of others, to the most pure form of gambling and swindling". Finance drives "the process [of production] beyond its capitalist limits" resulting in "overtrade, overproduction and excessive credit" in ways that rebound on production itself."

The first few chapters of Zombie Capitalism which look at Marx's thought and its application to 21st century capitalism are some of the clearest explanations of the subject I have ever read. Harman's great ability as a writer was to make these concepts accessible. The rest of the book applies this analysis to this history of capitalism, and reasserts some of the ideas which the International Socialist tendency that Harman was part of, developed to explain particular aspects of economic history. Thus Harman explains again the "Permanent Arms Economy" the enormous government spending that enabled the "long boom" of the post-war years to provide so much stability to western economies until the late 1960s.

Harman also surveys the wider economists, both right and left, and both develops their work and criticises it. In particular I found his discussion around the causes of the Great Depression very useful. Of particular interest to current economic debates is Harman's critique of Keynes. Today it is popular to argue that government spending can solve economic crisis, and many mainstream economists are returning to Keynes after rejecting him through the neo-liberal era of the 1980s and 1990s. Yet Harman is critical of Keynes, not least because he argues that such government spending had little to do with rescuing the economies of the 1930s (until the war economies began) or the long boom. He also notes that during the 1970s, governments became convinced that Keynes ideas were infallible, yet when they did fail, quickly switched to more monetarist ideas. Harman locates the end of the long boom, not with particular economic priorities or policies, but rather in the falling rate of profit.

Harman concludes this monumental work by looking at the changes that have taken place in the modern economy. He discusses whether the working class, identified by Marx as the system's "grave digger" can still play that role. He finds that while the class has changed in many ways, workers of different types are still the producers of the profits for the system. He also challenges some of the myths - that manufacturing is dead in the UK, or that call centres are the most important section to developing capitalism in India. In addition, Harman argues that many of the sacred cows of those who believed in globalisation (from both the right and left) have proved false. Capital still tends to associate and rely upon one nation state and few capitalists are actually able to up sticks and move around the globe at will to defy workers fighting for better conditions.

Harman does not ignore the wider implications of capitalism's ongoing existence. He looks in detail for instance at the environmental impact of the system, he uses a classic quote from Marx to point to the way that capitalist interests over-ride the needs and interests of wider society:

"In every stockjobbing swindle everyone knows that some time or other the crash must come, but everyone hopes that it may fall on the head of his neighbour, after he himself has caught the shower of gold and placed it in safety. Apres moi le deluge! is the watchword of every capitalist.... Hence Capital is reckless of the health or length of life of the labourer, unless under compulsion from society."

"Exactly the same logic as that described by Marx is found in the attitude of capital to the pumping out of climate change gases today. Capitalist politicians make beautiful speeches about the need to do something.... and the bow down before interests which say that this or that measure to deal with climate change will be too costly for the economy to bear."

This analysis has only one conclusion. That if we are to avoid the destructive reality of capitalism, then we need to destroy the beast itself. Harman's book should be a weapon in the hands of every activist who wants to challenge the system. It is a forensic disection of capitalism, whether discussing the falling rate of profit, or the peasantry in the modern world. It also points to the alternative. A system based on need, not greed. The socialist society that Chris Harman devoted his life to fighting for. Zombie Capitalism along with the wealth of books and articles of Harman's are essential ammunition in that ongoing fight.

Fantastic work by Harman ..one among few reviews where the author gets all brownie points from you .. The book deserved it... would like to read more reviews on economics...