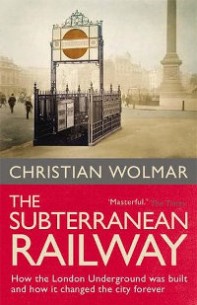 In his introduction to this history of the London Underground, Christian Wolmar makes the point that few writers on London discuss the enormous rail systems that lie beneath the surface. Indeed, Peter Ackroyd's wonderful biography of the city apparently only has half a dozen references to the Underground. This is a shame because the history of the London Underground parallels the rise of London the city and carries the marks of many of the social events that go with it.

In particular, the Underground bears the marks of the political and economic choices made to build it. Like most great Victorian innovations, the early lines were driven by private finance, raised by railway entrepreneurs who hoped for a swift return on their investments. Few of them, or their shareholders lived to see their money back and as the system got expanded, rival companies swallowed up others, until the 20th century when the whole became partially taken over by the government and part of what is now London Transport.

To the modern traveller this might seem unimportant. But it might be worth contemplating the years of delay caused by such early private finance schemes as when your tube sits waiting in the dark for no apparent reason, it could well be because of decisions made by early industrialists. They may well have chosen to install a rail junction instead of routing tunnels above and below each other. The money saved made the total cost easier for the board of directors, but generations of travellers have cursed their wasted time.

The lines themselves often follow roads, lost rivers and may not take the most direct route. Again this was often about saving money. Early tunnels were made through the "cut and cover" method. Engineers effectively dug an enormous ditch then covered the tunnel over. This was costly and caused enormous disruption, it also meant compensation had to be paid. Railway companies were accused of directing their proposed routes through areas were residents were easier to displace. Wolmar quotes a local vicar, near Smithfield who said against the builders of the early Metropolitan line:

"The special lure of the capitalist is that the line will pass only through inferior property, that is through a densely peopled district, and will destroy the abode of the powerless and the poor, whilst it will avoid the properties of those whose opposition is to be dreaded, the great employers of labour."

The problem wasn't just the capitalists. It was also the government. Victorian laissez-faire capitalism frowned on government involvement in such projects, so the "haphazard" design of the underground was partly due to "being a pioneer" but also "due to the refusal of the government to engage with the planning of the system". As Wolmar comments the "French system of central planning was not the British way."

Of course this doesn't just apply to the London Underground, but also other major transport systems. The lack of a central London overland station of any note, and the multiple lines heading into diverse train stations from around the country, making travellers lives overly complicated. Nonetheless there were many who wanted to make the system more rational, though not all of them had the view of a publicly owned system. Albert Stanley, appointed to oversee their investments by a group of American businessmen began the process of branding the whole tube with iconic signage at the same time as joint tickets for all the lines were coming into play. Stanley, like all good capitalists did his best to ensure that his lines made profits for the shareholders and to do so the largest bus company. Rather than close it down he began to "integrate the services in such a way that direct competition against his own underground lines was reduced, but also ensured he could weaken the remaining three lines outside his control by using buses to run against them."

Anyone who has witnessed the traumatic effects of bus de-regulation will have seen similar tactics employed by travel companies against each other, trying to drive competitors out of business before putting up their own prices.

It is tempting to repeat the many fascinating stories of social history or technical engineering in this review. Wolmar tells the story of the way that in the early days of the Blitz, Communist Party members and others forced London Underground to open up the tube as bomb shelters. He then tells the less well remembered stories of the way that the Underground became almost a permanent home for many Londoners. Authorities put on trains to provide food and water to those sheltering in the stations, and their were enormous problems with sanitation. Underground denizens even elected representatives to negotiate with the authorities. Wolmar also reminds us that the Underground was a shelter during the First World War, something often forgotten by those whose history only goes back to 1939.

After World War Two, the Underground entered a long period of decline which the system has only recently escaped. He blames this on two things:

"The lack of investment for much of the past fifty years, and overcrowding, with record numbers now using the system. The story of the Underground since the Second World War is a sad tale of missed opportunities, displaying a lack of foresight over the need for new lines and based on the mistaken notion that usage of the system would decline as a result of the nearly universal ownership of the motor car."

This lack of investment is partly to blame, in Wolmar's view for the tragic fire that took place at Kings Cross Station, an event which recently had its 25th anniversary. Perhaps more importantly Wolmar argues that successive governments saw the London Underground as a problem rather than something to assist London's economy and indeed he complains as much about "short term political interference" as he does privatisation when listing the ills afflicting London's transport system. Tucked away in a footnote he points out that:

"Even today, London Transport receives around half the level of subsidy in relation to income compared with its counterparts in European cities - typically only 30 per cent of its money comes from subsidy, compared with twice that level in Paris or Berlin."

In addition, he points out that it is almost impossible to measure the importance of the system through the money it can make:

"A financial study of the Victoria line made thirty years after the first section opened in 1968 still suggested that it was only a marginally worthwhile development even when taking into account the social benefits such as savings on car journey times.  Looked at financially, the Victoria line appeared to be a complete non-runner... Yet the line is operating at virtually full capacity for much of the day and is a vital part of London's infrastructure."

I had expected Wolmar's book to be a interesting anecdotal history of a part of London. It is that, but it is much more. It is an argument for a rational public transport policy and that makes this an even more worthwhile read. That said, it is full of fascinating information, the stories of the underground trains powered by steam and filled with smoke, the attempts to move trains with long ropes or compressed air and the experiences of passengers underground with few windows and lights are fascinating and will almost certainly give the modern commuter something to think about while waiting for the Central Line.
Posted by Resolute Reader at 8:15 pm