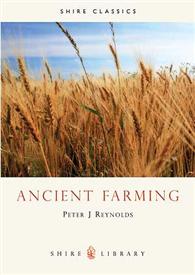 This short book is a useful look into what we know about how people in the neolithic, bronze and iron ages, farmed. Beginning with a section on the evidence that archaeologists use to try and piece together the lives of ancient farmers, the book moves on then to look at the development of agriculture and how farming itself took place.

The sections on the development of the earliest ploughs are some of the most interesting, in part because the work is informed by experimental archaeology and farming that takes place at the Butser Ancient Farm. Here they recreate ancient tools and experiment with how the worked. They also try and apply some of what the know of farming to the past, so for instance, archaeological sites with a post hole, surrounded by a depression in the earth may well be sites of ancient hay stacks. In the more recent past, these tended to be made in a similar way, built around a central pole fixed in the earth. Some of this the author points out, may be conjecture, but other evidence is more convincing. The scratch marks on ancient plough tips matching those made after farming with modern copies proving, with little doubt, that this was the original purpose for these tools.

The final chapter deals with the seasonal life of an ancient farming. Unsurprisingly it is very similar to life for many farmers today, in terms of the times of sowing, harvest and ploughing. The tools are different, the scale is different and today farming is driven as much by the profit motive as by the need to feed people, but there is much that remains the same. A useful introduction to this subject.
Posted by Resolute Reader at 9:45 pm