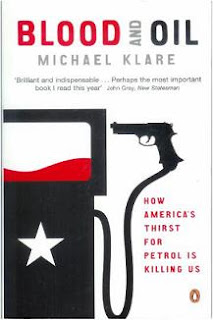 Subtitled "How America's Thirst for Petrol is Killing Us", Michael Klare's book is an excellent attempt to understand the history of the relationship between the United States and the sources of oil around the world.

Unfortunately, the book is somewhat dated. The copy I got from my local library is dated 2004 and thus he was writing only in the earliest days of the Afghanistan and Iraq occupation and before the Obama Administration. Nevertheless, I found it very useful, particularly from a historical point of view, as well as understanding the reaction of the United States government to the September 11 attacks.

US oil companies had begun to work to start controlling the largest oil reserves by the 1930s. This meant of course, Saudi Arabia, where the world's largest oil fields remain. The Second World War put a new emphasis on oil, and the US moved quickly to shore up reserves. President Truman meet in private with the Saudi King just after the Yalta conference. Speculation is, that he offered US money and expertise to protect the Kingdom in exchange for priority access to oil. Since then, US foreign policy, military intervention and government priorities have, in large part been about protecting this link.

The later sections of Klare's book look at US policy in more contemporary times. In 2001 the US government issued a report into the future of US energy policy. This was an attempt by the administration to look into the problems of future oil dependency. As oil gets used at an alarming rate, with more and more countries placing more and more demands on the reserves, and regional instability affecting oil regions like the Middle East and South America, President Bush was concerned about whether there would be enough supplies.

Interestingly, though the report paid great lip service to energy efficiency savings, or alternative sources of fuel, in reality it was about increasing US dependency on foreign oil. The authors, headed by the oil man Dick Cheney, used the opportunity of the report to instruct the government to do everything it could to maintain the status quo. More money must be spent control foreign oil, the Alaskan nature reserves must be opened up to the oil companies and so on. Rather than discussing in detail how dependency could be improved by reducing oil use, the report concluded that foreign sources must be increased. More emphasis was placed on oil from Alaska, South America and areas around the Caspian Sea. Klare demonstrates that this is a drop in the oil ocean. These sources are minimal at best and do not offer the long time security that the United States needs. They are also contested sources, growing economies like China have enormous demands for oil, and they too have their eyes on these areas.

The title of the book reflects this concern. Klare shows how, over the years, countless American lives have been lost in the interest of protecting access to this strategic resource. The potential for further clashes and further wars remains there, so long as the dependency on foreign oil continues. Which brings me to the most disappointing aspect of the book. I felt that Klare's alternative vision, though radical missed the mark. He calls for the US to stop arming and supporting regimes like Saudi Arabia, which can only lead to bloodshed. "Severing" the links between the US's energy behaviour and their overseas commitments sounds like a radical statement. But it is impossible given the structure of US capitalism. Oil is a central feature of modern capitalist economies. Breaking from the dependency means challenging the priorities of the whole economic system and the powerful oil multinationals. You cannot separate US military interests and their commerical interests like this.

Klare does discuss alternative fuels and energy sources, though probably not in enough detail to convince most readers that a low oil economy is feasible. To be fair to him though, this is not the purpose of his book, and he certainly does a good job of proving the potential for conflict over oil in the future, in many areas of the globe. One final thought though. Oil will run out. What happens after that will be terrifying. Klare's final call for a rethink over energy is important, if human society is going to avoid collapse and runaway climate change.
Posted by Resolute Reader at 6:32 pm