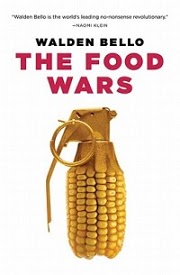 Much of Walden Bello's Food Wars covers ground discussed in Magdoff and Tokar's book which I reviewed previously here. Indeed Bello contributed a chapter to that volume, with the same title as this book. Nevertheless, there is much of use in Bello's short book, certainly it is very readable.

What Bello tries to do is to put the modern agricultural system in the context of capitalism. His argument is that capitalism has destroyed the old peasant based agrarian economies in the interest of creating a agricultural system based on the desire to make profits. This he says, isn't new. It began with the enclosure movements in England and continues today. In fact, he points out that the enclosures in England were almost unique for the extent to which they destroyed the peasantry, the "almost completely displacement of peasant agriculture" was "rarely repeated". For this reason, we have seen over the last centuries, policies that have gradually, and then with greater intensity destroyed the small-farmer and peasantry, replacing them with systems beloved of the major food corporations.

In three powerful case-studies, Bello looks at how Mexico, the Philippines and China have, in their different ways, become tools of international finance capital. The Structural Adjustment Programmes of the 1980s and 1990s have, in the first two cases turned countries that were net exporters of food into countries reliant on imports. In the process, contrary to the claims of the IMF and World Bank, millions have been impoverished and hungry. China has, until recently, been an agricultural success story. Almost entirely self-sufficient, despite previous disastrous policies towards the peasantry, it's new turn toward the market threatens to undermine its own ability to feed its population. Once again we are seeing protests in great numbers in rural areas as people resist the drive towards agricultural for export and profit.

The myths of agro-fuels as a solution to climate change are exposed here again. These are not carbon neutral, but rather are cash crops that make the multinationals rich. That names like Bill Gates and Richard Branson can crop up as part of the agro-fuel industry might give an inkling as to why recent US and EU governments have found this new crop so popular. At the very least Bello points out, these fuels do nothing to challenge the systemic problems with the system that is producing environmental disaster. It is also useful to note in passing that Bello shows that agro-fuels were not the primary driving force behind the recent food price rises, though they played an important contributory role.

Finally, Bello looks at the alternatives, basing many of his arguments on the peasant and small-farmer organisations, such as Via Campesina. He puts an excellent case for the importance of small-farms over massive mono-cultural industrial agriculture. Bello points out that mixed, family farms are more efficient, better for the environment and better for food than the enormous farms that produce a single crop. Localised production for national population is the way forward he argues.

I think this is interesting, but, as with my criticisms of Tokar and Magdoff's book, I think that this solution in part accepts the logic of capitalism, or perhaps the inevitability of capitalism. I've no doubt over the technical arguments, but I wonder if the actual farm size is the key point if we were to consider agriculture in a economy not driven by profit. I also think that the role of peasants and farmers is considered in isolation. Their struggles are important, but how can they be linked up with the urban poor, the working classes and the trade unionists. All these groups have an interest in fighting for better food, better agriculture, better environments and capitalism itself.

In conclusion then this is a useful book, easy to read, inspiring and devastating in its critique of modern capitalist agriculture, but it raised a large number of further questions in my own head.