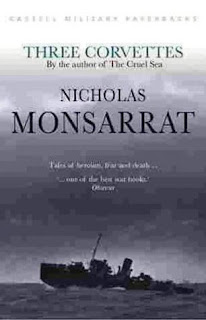 Detailing his time in the Royal Navy during World War II, Three Corvettes is actually Monsarrat's embellished diaries. The Corvettes were a small escort ship, used to bolster the limited number of destroyers as fast, offensive ships to help counter the threat from submarines. First published during the war, this is more than a war story. In fact for much of it, we feel the tedium of days at sea, long watches were nothing happens, yet crew members are constantly alert - for a change in the weather, for enemy aircraft, or the sound of something on the sonar.

There are of course moments of horror. Monsarrat details the crews they rescue from the sea after their ships are destroyed and those they cannot find. His stories are personal, emotional and powerful. They are also tragically painful. I'm fascinated that they were published during the war itself. Many of those depicted in these pages bought copies of the first volumes and read them during voyages that Monsarrat helped command. But my mind is fascinated by the reaction from those on shore who would have read them and perhaps understood for the first time what their sons, brothers, husbands and fathers were going through.

There is humour, Monsarrat has the eye for a good yarn, and in particular I enjoyed the messages flashed between ships, turning the vessels themselves into characters in a story. Describing the minesweepers looking for mines he writes that:

"you hear a 'WHOOMF!' You look round, and there is a small surprised ship scuttling away from a patch of boiling foam.... We once saw one of them almost overwhelmed by a gigantic explosion close astern of it: a huge column of water shot into the air, hiding the ship from us. When she emerged we called her up (feeling rather shaken ourselves) and said, a trifle patronizingly: 'That was a big one.' Her reply: 'What was?' put us in out place exactly."

The book tells the story of Monsarrat rise to captain his own ship. I suspect for many readers, myself included the sequence of stories and anecdotes will chiefly be of interest because it makes you realise how much of Monsarrat's most famous book, The Cruel Sea, is actually based on real experiences. In fact, some of the more horrific, or perhaps less believable parts of that work turn out to be based on the authors own time at sea. Reading this short biography makes The Cruel Sea an even more impressive novel.

Monsarrat - The Cruel Sea
Posted by Resolute Reader at 9:15 pm