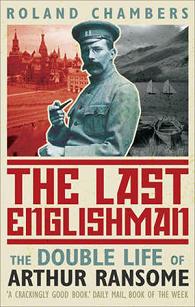 Those who know Arthur Ransome as the writer of the excellent childrens novels in the Swallows and Amazon's series are often amazed to learn that he had a rather more exciting life than you might imagine from someone whose most famous works concentrate on sailing, fishing and camping.

In reality, Ransome's life was dominated by much bigger events, which is why only a few chapters towards the end of this excellent book deal with the later stages of his life when he became famous as the author of children's novels. The vast bulk of the book deals with his times in Russia - particularly the period of the Russian revolution.

Ransome travelled to Russia looking for, it might be said, himself. Escaping from a marriage and a fatherhood that he clearly loathed, he arrived into a country seething with political discontent. He was there, to locate and translate Russian fairy tales. He found himself caught up in the greatest working class revolution that has ever taken place. Ransome was clearly bowled over by events. He was inspired and fascinated by the involvement of ordinary people in the organs of democracy - the Soviets.

One of the strengths of this book, is that the author quotes at length Ransome's reportage from Russia. It gives both a sense of the period and the man himself.

"It is impossible for people who have not lived here to known with what joy we write of the new Russian Government. Only those who know how things were but a week ago can understand the enthusiasm of us who have seen the miracle take place before our eyes." he wrote on the front page of the Daily News in the aftermath of the February revolution which overthrew the Tsar.

Ransome was an unlikely supporter of revolution. As Chambers puts it, "in terms of his family background and education, he belong to the class which dominated and was protected by the Provisional Government [i.e. that which was in opposition to Soviet power throughout 1917]"

Ransome certainly wasn't a revolutionary, though he was a socialist when he went to Russia. His politics seemed to be those of the Fabian movement in the British Labour Party which certainly was no friend of Bolshevism. But he found himself utterly convinced by the realities of revolutionary power - a power that I think explains his enthusiasm far more than Chambers' argument that Ransome's failure at Rugby. Rather than having some sort of chip on his shoulder, I think that Ransome's excitement had more to do with the fact he was prepared to make an honest assessment of the revolution's highs.

Later this changed - in his excitement and desire to bring the truth about Russia to a wider audience, Ransome tended to gloss over some aspects of it. I don't think this is because Ransome was blind to reality - more that he understood that the revolution had to be defended and fought for. This enthusiasm and lack of criticism meant that he was viewed with distrust and suspicion in the higher echelons of the British establishment.

Media discussion of Ransome in Russia often centres on whether he was a British Spy or not. The problem is, that I don't think it is as black and white as this. Ransome clearly did intelligence work for the British government - he also propagandised and helped the Bolsheviks. Lenin clearly saw him as someone valuable enough to trust with writing accounts for the western media. But for all his enthusiasm for revolution, I don't think that Ransome really broke with capitalism - perhaps he saw the new democracy but could conveniently believe that things were different back home.

Becoming personal friends with leading Bolsheviks, marrying Trotsky's secretary and propagandising for the revolution was one thing. But his final return to Britain meant an abrupt end to his experiments with socialism. On one occasion he was shadowed by the police and interviewed. Chambers reports Ransome's answer to the question "what are your politics?" as "fishing". Ransome never finished his history of the Russian revolution, though his two books on Russia remain important works for those interested in studying the reality of the events of 1917 and afterwards. The police noted with relief that he didn't (despite lots of invitations) speak at socialist or radical meetings about his experiences - something that Ransome's friend and colleague, Morgan Phillips Price certainly was happy too.

Oddly enough, I finished this book not liking Ransome as a person. His revolutionary excitement for the idea of workers taking power, never seems matched with his own relationships. His abandonment of revolutionary politics may be due in part for his concerns for his new wife's family under Stalin, but Chambers portrays him as a man who was only really after personal stability - the right wife, the perfect boat, the best home and a career that would see him lauded for something, anything. His relationship with his daughter is arrogant and uncaring, his lack of emotional engagement with the death on the Western Front of his brother is odd from a man who seemed to put such emphasis on sibling relationships in his novels.

Ransome's fame eventually brought him wealth and some sort of happiness. But this later stage of his life is the least interesting part of this great biography. The importance of which is that it puts Ransome's strange and contradictory life squarely into the context of a changing world, shaped by the great struggles of the early 20th century - war and revolution.

Hardyment - Arthur Ransome and Captain Flint's Trunk
Ransome - We Didn't Mean To Go To Sea
Ransome - Peter Duck
Cliff - All Power To The Soviets
Posted by Resolute Reader at 9:10 pm