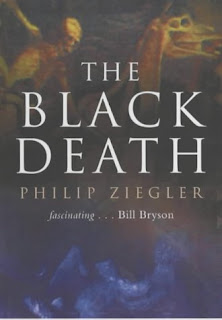 The Black Death decimated the population of the medieval world. The epidemic that hit Europe in the 1340s can be argued to have fundamentally changed the world. While on the surface, the social relations that government the peasant dominated societies were similar before and after, beneath the surface, changes that had started before the plague hit, were being accelerated.
Ziegler's book is an excellent narrative history. In trying to understand how the Black Death changed and shaped the world, he begins by looking at its impact as it proceeded through Europe. The plague had raged with "unparalleled fury" in the East. Rumours reached the major European seaports of a depopulated India, but "it does not seem to have occurred to anyone that the plague might one day strike at Europe". But the Europe wasn't isolated anymore. Trading ships travelled the oceans of the globe and with their cargos, they carried the pests that brought the plague. With grim inevitability, the disease arrived.
The first place to be hit was the great centre of European overseas trade - the port of Genoa in Italy. The disease then spread rapidly westwards, the impact was similar in most European nations. This shouldn't be surprising, there was very little difference between the nations of Europe in those period. while the scale of the suffering sometimes varied, the ineffectual responses were very similar. Religious figures blamed the sins of the people and urged more prayer - though sometimes they were honest enough (at least in private) to admit that this would have little effect. The role of religion is important - not least because it shaped the only real world view that existed in medieval Europe. But also because the church represented the only bureaucracy that could give effective records for the impact of the plague. Statistics for the numbers of deaths in various towns and villages come from church records, but more importantly figures for the numbers of replacement churchmen allow the modern scholar to extrapolate the impact of the disease.

This is important, not least because the medieval chroniclers are renowned for their inaccuracy when it comes to figures. Medieval writings describe deaths of tens of thousands in cities that could not possibly have had these populations. (Similar problems exist in the descriptions of contemporary battles - sizes of armies and casualties routinely don't match reality).

Zieglar settles on a figure that says that approximately a third of Europe's population died. The plague didn't have equal impacts - the rich suffered proportionately less, though no one was spared. Occasionally, in an attempt to find blame, frightened populations massacred those they thought had incurred God's wrath - the Jewish pogroms of the time are well documented and often seemed to have, at least the tacit support of the local establishment.

There were other interesting by-products of the plague, and the inability of the medieval mind to come to terms with what was happening - the Flagellant movement of religious people, who travelled from towns to cities on the continent, whipping themselves in front of crowds being one of these.

The scale of the death was truly shocking - Ziegler points out that "even the front-line infantry man [in the First World War] had a better chance of surviving the war than the medieval peasant the plague." But Ziegler argues that contrary to some schools of thought, the shock to the social system that was the Black Death wasn't enough to usher in the changes that lead to the Peasants Revolt in the early 1380s. Instead he argues, that the Black Death encouraged the social processes - such as the increased numbers of peasants selling their labour - to occur. The shortage of labour after the plague had passed allowed, at least initially, wages to rise.
But the Black Death did shake the medieval world. It helped change the way many viewed the world. As Ziegler says:

The Black Death did not cause the Reformation, it did not stimulate doubts about the doctrine of the Transubstantiation; but did it not cause a state of mind in which doctrines were more easily doubted and in which the Reformation was much more immediately possible?

Because the Black Death had not spared anyone, because the church had been proved ineffectual, some of the most important pillars of society were undermined. As Ziegler concludes, the world was never quite the same again.

Related Reviews
Zinsser – Rats, Lice and History
Davis - The Monster at Our Door - The Global Threat of Avian Flu
Pryor - Britain in the Middle Ages
Posted by Resolute Reader at 9:26 pm