Clive Finlayson - The Humans Who Went Extinct, Why Neanderthals died out and we survived 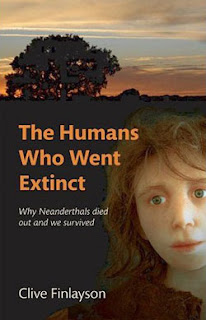 Why the world is dominated by us and not Neanderthals, is a surprisingly complex question. Traditionally, we've been given an image of Neanderthals as lumbering idiots, not capable of withstanding the superior brain power and agility of our own ancestors. The reality is of course, far more complex.

The fossil records doesn't show any evidence that Neanderthals were ruthlessly displaced by our ancestors. What it does show, is that Neanderthal society was surprisingly complex, lasted (in the case of a small group in Gibraltar) as recently as 28,000 years ago. These were tool makers and hunters, not the stupid brutes portrayed in countless cartoons.

This is a fascinating look at our own peculiar history - how we developed, how tools transformed our ability to survive, but also occasionally limited our ability to adapt. The surprising role of climate change in getting us to were we are now is clearly explained.

Finlayson looks at why the Neanderthals went extinct and we didn't. There is every evidence that our ancestors and Neanderthals lived close together at the same time, though no evidence that they interbreed. Certainly they would have encountered each other while hunting or moving to different scavenging grounds.

So what happened to the Neanderthals? At a time of extremely primitive technology, environmental changes would have forced great changes upon human societies. In particular, the favoured hunting grounds of the Neanderthals, where areas where small tree coverage allowed for "ambush hunting". A colder climate forced the trees back, reducing areas available for hunting.

Alternate periods of warming and cooling would repeatedly isolate and then reunite populations. Obviously, some populations might not survive the changes, and the process would gradually reduce the overall population.

Luck has played a great hand in our own evolution. While some populations of our ancestors would have died out, a combination of luck, further developed bodies and the development of better technologies, as well as a wider global spread helped us survive.

Ruminating further on what survival means, Finlayson sees worrying parallels with today's changing planet. However he also points out, that it is all too easy to think that we are were we are today, because we are the product of "successful genes". Our genes are successful, only in the sense that we have made it to this point. "There were many highly successful lineages that went extinct because their luck ran out - the Neanderthals and other populations of proto-Ancestors among them".

More of the branches of our ancestral tree vanished than survived. It is only a small fraction of human existence on the planet since the development of agriculture, the point that fundamentally changed us. In that time, Finlayson argues we've lost contact with our biological heritage. There is a mismatch he argues, between our current methods of organising our lives, and the biology that evolved over millions of years.

In a sense I agree. This is close to the argument that Marxists put about a "metabolic rift" - that we have become alienated from the natural world that we are utterly dependent on. But there is a danger with Finlayson's argument - that we are simply the products of our biology. We have a unique ability to transform the world around us. At the moment, the present society we have created threatens to undermine the very ecology that is the basis for life on this planet. But we do also have in our power to transform our way of organising society and avoiding the fate of the Neanderthals.

Mithen - After the Ice, A Global Human History

Buy it here.
Posted by Resolute Reader at 6:41 pm