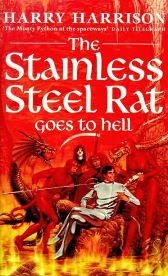 When I was about ten, I was given a copy of a collection of Science Fiction stories, that I still have today. The book can be credited with a lifelong love of that particular genre. Amongst the many stories in it, was one that wasn't a complete story, but actually turned out to be the first chapter of Harry Harrison's novel, The Stainless Steel Rat.

From the moment I read it, I was hooked on the idea of the underground criminal, the last of his kind, living beneath the surface of the dull utopian future society. I loved his warped justification for his actions, his quirky sense of humour, the funny little sayings, and the amusing philosophy:

"At a certain stage the realisation striked through that one must either live outside of society's bonds or die of absolute boredom... There is no longer room fro the soldier of fortune or the gentleman adventurer who can live both within and outside of society. Today it is all or nothing. To save my own sanity I chose the nothing."

So when I discovered that not only was the story I had just a first chapter, but part of a series of novels, my ten year old heart nearly popped in excitement. Since then, I have followed the Rat's adventures on both sides of the law. Read and re-read his fixing of elections and his travels in time. I've often smiled to myself at the gratuitous use of invention to save the day, and the fact that no matter how many bullets are sprayed around in an armed robbery, nobody ever seems to get hit.

This latest escapade is very much written with tongue firmly in cheek. When his beautiful wife disappears after visiting a strange religous temple on a utopian pleasure planet, the Rat travels through time, space and alternate universes to get her back. The evil (and multiple personalitied) rogue physicist Slakey will stop at nothing to prevent someone getting in the way of his evil plans, and the Rat has to use all his resources to save the universe again.

Well, it made me laugh a few times, though I did not like this Rat, as much as I liked the younger Rat who had to rely on his own resources and invention far more. Maybe it's the revolutionist in me, but I prefer the tales of the underground bank robber, hiding in society's cracks much more than those of the rich, experienced Rat working for the planetary police force. Or maybe it's just some nostalga for the days when reading The Boys Big Book of SF wouldn't look strange on the bus.
Posted by Resolute Reader at 3:23 pm

I agree that The SSR Goes to Hell isn't the best in the series - for me that would be a toss up between the original SSR, SSR Saves the World, or A SSR Is Born.

Goes the Hell isn't the last in the series, though. The final one was The SSR Joins the Circus, which is a much better book than Goes to Hell.

The short story in that book of short SF stories you have was a complete short story, publishing in Astounding magazine in 1957 - a second short story followed, then it was expanded into the novel.