Plutarch - Fall of the Roman Republic 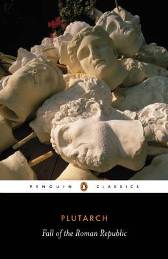 I have to admit that I took this to Italy with me, because I quite liked the idea of sitting reading an ancient historian in some pavement café overlooking the Roman Forum, or at Ostia Antica. Call it being pretentiousness if you like, I doubt anyone really noticed. No one seems to spend as much time looking at what others are reading as I do.

Anyway, returning to Plutarch, who was one of the last of the classical Greek historians, and has been described as the “first modern biographer”. Well at least according to the blurb on the back of my penguin edition.

This version of Plutarch’s “lives” looks at the births, careers and deaths of 6 important figures in the fall of the Roman Republic, and the rise of the Empire – namely Marius, Sulla, Crassus, Pompey, Caesar and Cicero. There is a certain amount of natural overlap between the stories published here, but I understand that's because they were never intended to be collected like this, according to the Wikipedia article on Plutarch he "was not concerned with writing histories, as such, but in exploring the influence of character — good or bad — on the lives and destinies of famous men".

Each chapter has a short introduction by Robin Seager. I’ve not enough knowledge of the period to know whether his points and criticisms of Plutarch’s work are valid – I suspect that they are, after all some of the descriptions are quite superficial.

What is being examined in this book is one of the most intriguing of subjects for classical historians – why did the mighty Roman Republic become transformed into an Empire, with overall power being shifted into the hands of a single man?

Plutarch sheds some light onto the question – but he certainly views events as the consequences of individual’s desires, rather than bigger forces at work within society. The most interesting, but perhaps most exasperating chapter is that about Caesar. Plutarch would have us believe that Caesar’s desire to overthrow the Republic and install himself as supreme leader had been with him since youth, rather than seeing Caesar as being the product of a time, a place and social forces beyond his individual control.

Plutarch is easy to read though, and if you want a good introduction to the names, places and crucial events of this fascinating period of history, this is worth a look, and perhaps more accessible, though certainly less exciting as Suetonius.

Project Gutenberg has the works of Plutarch online for free, go here.
Posted by Resolute Reader at 9:14 pm