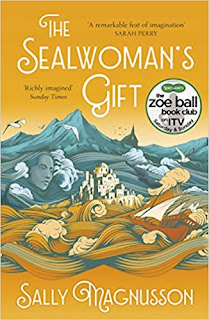 Sally Magnusson's novel The Sealwoman's Gift is one of those stories which seems so unbelievable, it cannot possibly be based on fact, and yet it turns out that the events at the heart of the story, and much of the detail did, actually take place. It seems extraordinary that pirates from the Mediterranean travelled as far north as Iceland and took hundreds of captives back to slavery in north Africa, but they did, and many thousands of coastal inhabitants from the countries of Western Europe were similarly captured. The novel is based on the true account of Travels of Reverend Ólafur Egilsson whose real life capture alongside his wife, children and four hundred, is well attested to. While we don't know the name of Ólafur Egilsson's historical wife, in Magnusson's book she is called Asta, and her independent spirit is not diminished by the horrors of the voyage to Algiers. Instead she becomes emboldened despite seeing her son sold off and her imprisonment in the harem of Cilleby a wealthy merchant and slave trader.

The women in Cilleby's harem are imprisoned, but they don't suffer the violence of that their sons and husbands do as slaves. Instead they are left with menial, women's jobs, except when Cilleby selects them for sex. At the centre of the tale are stories, the Arabic stories of the Arabian Nights, or versions thereof, or the great Icelandic sagas that the women tell each other each night. Stories allow Asta and Cilleby to form a bond, which becomes mutual admiration and then love. While elsewhere Asta's husband, the pastor, desperately tries to get his government to raise the ransom that will return the captives home.

Several reviewers have called this a romance. I didn't get that. For me this is a story of how civilised, and brutal, 17th century European and Mediterranean society was. But also how there was already a continent wide trading and political network that allowed King's in Denmark to ransom slaves in Algiers. Events are beautifully portrayed, but they are heartrending. There is the brutality of separation and the rape and violence that comes with slavery. Despite the claims to civilisation that Cilleby makes, Asta points out, to his intense surprise, that his wealth and power is built on violence. I don't know enough about north African slavery to know whether the central romantic plot used here is even possible. It seemed unlikely, but not impossible.

But the real story is the compromises people make to survive, and stay sane. When rescue comes for Asta and her fellow captives it comes as a doubled edged sword, the solutions to which make this a novel that's a cut above the average.
Posted by Resolute Reader at 6:13 pm