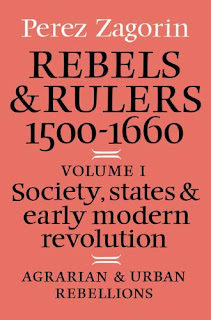 Perez Zagorin's book was an enormous challenge for me to finish. This was not because it was boring or inaccessible, but because I found his conceptual framework completely unbelievable. In fact, on page 61 when he declares that "Early modern society was not a class society" I almost discarded it. Nonetheless, after a pause of some weeks, I did eventually finish the book because it covered some of the events I discussed in "Kill All the Gentlemen" and because I was interested to see where Zagorin's analysis would take him.

As far as I can see Zagorin is writing a polemic against historical revolution in general, and Marxists in particular. He writes, for instance, that:


The claim by Marxist scholars that the English and French revolutions were decisive events for the emergence of a capitalist order is far more a matter of faith than of historical proof or probability... The characterisations of the 'bourgeois revolution' are commonly vitiated by their verbal equivocations and mechanistic class analysis. When used by historians of Marxist persuasion, feudalism and bourgeoisie, for instance, tend to become terms of almost infinite elasticity designating widely divergent conditions and groups.

This is not the place to discuss the Marxist analysis of the transition from feudalism to capitalistic, though I would highlight that a number of different Marxist historians (eg Christopher Hill), have made very detailed cases for the emergence of capitalism out of the changes that took place in the English Revolution. Despite referencing some of their work, Zagorin is keener to dismiss it out of hand, rather than engaging with the detail.

Having dismissed the Early Modern period as being a class society, he introduces the idea that instead this was a "society of orders". But constantly, Zagorin has to recognise that whatever label is given to society, this was one were there were definite economic groups of people in a hierarchical structure. Then he ties himself in linguistic knots:

Elsewhere references to "rich and poor" etc suggest that the concept of class might be much more useful than Zagorin would admit. Clearly the author would like to have his cake and eat it. Class doesn't exist, except when it does. All this would be simply frustrating, if it didn't lead into a complete confusion about what revolution was and is. In particular the comparative analysis Zagorin between revolution might be useful when talking about the English, French and American revolutions. It breaks down when applied to events in the 20th century when circumstances were very different, so while he spends a great amount of ink trying to decide whether the category of "Great Revolution" is useful or not, he fails to illuminate much about what those revolutions actually were.

For instance, when discussing the English Revolution, he argues that these cannot have been class conflicts because figures from both the aristocracy and the middling classes fought on both sides with Parliament and the King. Marxist historians of the English Revolution have tackled this crude argument in a number of places, but it simply fails to understand the very nature of class conflict itself. No revolution, as Lenin pointed out "is pure".

There is an illuminating comment from Zagorin when writing about Hobsbawn's "Marxism obsession" with "the transition from feudalism to capitalism". It is, Zagorin says about Hobsbawm, almost as if this transition "embraced everything significant in European change". Even the non-Marxist reader must surly, at this point, answer "Well yes, that is the point". If you don't see the transition from a society of lords and peasants to one dominated by the bourgeoisie and the working class as embracing everything significant in European change, then I am not sure what you understand by the word change. Despite the amount of writing about Revolution in this book, it is clear that Zagorin doesn't understand what the Revolution means: the transition from one mode of production to another, that transforms everything about society in the process.

The first half of the book deals mostly with the conceptual framework that Zagorin is proposing for use in the second half which is a study of various agrarian and urban revolts in the period covered. The problem is that his framework is inadequate by any stretch of the imagination. In one place he declares that "Calvinism and Puritanism were religious, not political movements", but that is to deny that religion in this period was highly political. It was precisely because religion was intensely political that there were multiple revolts around religious, as well as economic, issues through this period. Oddly enough the peasants involved in the Pilgrimage of Grace or the Prayerbook Rebellion understood this better than Professor Zagorin.

The latter half of the book then looks at various risings, and while there is interesting historical material about the European revolts it can be mostly found elsewhere. The fundamental problem is that Zagorin's historical analysis begins from a dislike of Revolution and those who see it as being the motor of history, but his lack of clarity on what revolution is, fundamentally undermines the whole of Zagorin's thesis, and sadly this book.
Posted by Resolute Reader at 8:49 pm