Robert Kee - The Most Distressful Country 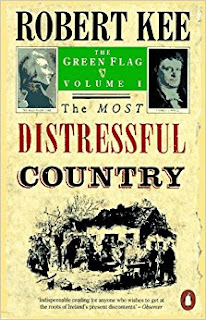 A recent trip to the North of Ireland prompted me to look at the history of Ireland. Robert Kee's Green Flag trilogy is often recommended as a good place to start to understand the historical developments that have led to the anachronistic situation we see today - the north of the Island part of the British State and the remainder "the South" an independent country.

Kee's book is not a complete history of Ireland, rather it is a history of the development of Irish Nationalism, used here in the sense of thinking of Ireland as a nation, rather than today when it might be used to distinguish a political outlook separate from that of the loyalists. The context for all of this is of course the fact that Ireland was Britain's first colony. The majority Catholic population were kept down trodden and oppressed while Britain used the Protestant landowning class to govern in its interests through a process of divide and rule.

That said, modern divisions - Catholic and Protestant - weren't necessarily appropriate historically. In the context of the struggle for Irish "nationalism" as Kee shows, many leading figures were Protestant. They were also keen to struggle for improvements to the rights for Catholics, who had historically had few rights. Take the famous figure Robert Emmet, who lead an uprising in 1803. Emmet was a wealthy Protestant who supported Catholic rights, in particularly their right to stand for parliament. The defeat of previous movements, including the United Irishmen, meant that Emmet could downplay the potential for the nationalist cause:

The reality is, of course, that a redress of grievances could not happen without a struggle against British rule, and for some form of independence. The period covered in this volume covers some of the great movements for this, such as the United Irishmen's rebellion of 1798. These took place in the context of the French Revolution and it is interesting to  speculate what might have happened had the military support from France been successful, or better organised.

Kee is particularly good an analysing events when he puts class at the heart of his history. Take the debate about the "union" between Britain and Ireland that was passed in 1801. Kee writes:


Opinion about a union did not run clearly down any political or social dividing line. The most solid opinion seems to have been among the Orangemen who were very generally described as being against it. This to may seem a paradox in the light of later events, but it was a logical attitude at the time, for the Orangemen simply represented the most extreme expression of the Protestant point of view, namely that they held a dominant position in Irish society and the legislature as things were, and what they held they wanted to hold. Even in later times, after they had identified their interests with the Union they were always to make clear that, in the event of a clash between those interests and the Union, it was the Union they were prepared to sacrifice.

One of the strengths of Kee's book is that he doesn't focus just on the ideas or actions of prominent figures. He writes with sympathy and understanding of the majority of the Irish population, particularly its peasantry and shows how their confidence in struggling against the status quo rises and falls. He also covers the great tragedies that befall them, particularly the Potato Famine but also the route cause of their poverty - the way that land ownership was organised solely to profit the owners and those who sublet land, rather than those who did the work.

The book finishes just before a new outburst of radical nationalism, the Fenian movement, following the decline of the earlier struggles. I look forward to reading part two.

Posted by Resolute Reader at 6:56 pm