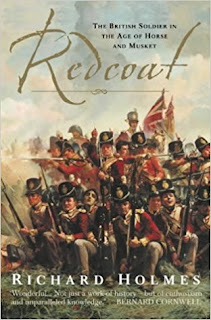 Initially I was disappointed by Richard Holmes' Redcoat. I had expected it to be a history of the British Army and in particular it's wars and battles. But Redcoat is actually much more rewarding - a social history of the British Army in, as the subtitle says, "the age of horse and musket". The period covered by this book includes some of the most famous battles of the British Army - Bunker Hill, the Indian Mutiny, Balaclava and so on. It also is the period when the deeds of the its soldiers ensured that the British Empire was created. This history doesn't look at the consequences of that, but explores who it was who fought in Russia, America, China, India and Europe to give the British ruling class world dominance and why they did it.

The British Army reflected the class nature of the society that created it. Holmes' describes the strange system of commissions, which enabled individuals to buy themselves into ranks in regiments and then the system of promotion (that often involved buying and selling commissions) that enabled officers to move up the ranks. It seems a system almost guaranteed to ensure that quality and experience was less important that money. The class system is a running theme through the book. What happened to soldiers and officers, why they enlisted, what happened if they were wounded, or pensioned off, depended in large part on who they were and where they came from:


When the 32nd Foot embarked for India in May 1846 it was a microcosm of the line infantry of the age. Its officers included three sons of landowners, eight of officers or former officers, and fourteen of varied middle-class occupation, including sons of a bishop, two clergyman, an Indian judge, a East India Company civil servant, a colonial administrator, a Canadian businessman, a city merchant a West India merchant and a bank manger.

The ordinary soldiers would, of course, have come from less illustrious backgrounds likely a poor or unemployed rural labourer, a working class man looking for money, seduced by the drums and bright uniforms and the promises of the recruiting sergeant. Holmes takes us through the lives of these individuals - how they trained, how they lived and loved, how they spent their money what they looted and how they kept it and so on. Holmes tells us much about these lives, and also the women who were around the troops. I was surprised to find out the extent to which soldiers families followed the regiments on campaign - even onto the battlefield, on patrol and sentry duty. There are sections here about who those women were - families obviously, but also prostitutes and camp followers who sold goods to the troops.

Discipline was harsh, and few officers were loved. Though there is a surprising lack of mutiny here (though on several occasions Holmes' discusses cases where soldiers attacked individual officers, often when drunk). An amusing example of what became known as fragging, is told here though:


The unpopular major commanding the 14th foot at Blenheim [1704] addressed rhe regiment before the battle apologising for his past behaviour and asking that if he had to fall it should be by the enemies bullets. A grenadier shouted "march on sir, the enemy is before you, and we have something else to do..." The battle over, the major turned to his men and raised his hat to call for a cheer: he was instantly shot through the head by an unknown marksman.

This was unusual though, and surprisingly, despite the horrors of war, the poverty and the bad equipment and conditions, the British soldier seemed remarkably loyal to his comrades, his regiment and country.

While Holmes' is an easy read, and he has a wonderful eye for the amusing and unusual anecdote, what this book does well is to answer a difficult question. Why did people join the army? Why did they frequently remain extremely loyal, and commit acts of enormous bravery for things that had very little bearing on their lives. They were fighting to build an Empire which would benefit few of them so what was their motivation to risk life and limb? Holmes' book goes some way to answering these questions, and does so in an fascinating way that allows the voices of the ordinary soldiers and British officers to come through. While there is a lack of wider context to much of the history, to be fair to Holmes that is not what he set out to write. I'd suggest reading this, alongside other histories (such as Richard Gott or John Newsinger's books below) that discuss what Britain did around the world and who it was who fought back.