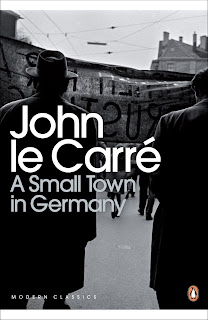 First published in 1968, John le Carré's novel A Small Town in Germany is one of the tightest spy thrillers I've ever read. Very little happens - most of the action is in the claustrophobic corridors of the British Embassy in Bonn, or in the homes of the diplomats who live in the towns nearby. Bonn is the "Small Town" in Germany of the title, but it's also a small town in that everyone knows everyone's business and, at least in diplomatic circles, is trying to get one over everyone else.

Leo Harting is a minor British embassy official who vanishes. He's managed to worm his way into being almost indispensable to the embassy's work, and suddenly he's gone, along with a host of very secret files. This would be frightening to the establishment at any time, but Germany in le Carré's novel is reaching a crisis point. The political upheaval of 1968 has led to a radical, right-wing politician Klaus Karfeld pushing for power, and he's doing it in the context of tense political negotiations by the British to become part of the Common Market.

Playing on German's concerns about Britain's close-links to the United States and their alleged failure to support Germany's post-war transition, Karfeld is creating such big waves that Britain's entry to the Common Market looks threatened, and a closer alignment with the Eastern bloc is on the cards for Germany.

Alan Turner is sent to Bonn to find Harting. He's crass, quick to anger and will stop at nothing to get the job done. His brisk, working class background and reputation as a bruiser, quickly winds up the Embassy officials who look like they'd rather not have the Harting question fixed. Turner is no James Bond. His style is a bullying interrogation of individuals, regardless of rank, and he is more likely to slap a female witness, rather than seduce them. He's not nice, but neither is anyone else in this world of spies - they are, after all, the tools of the British state.

Le Carre's writing is tight. Not a word is wasted on flowery descriptions, yet the grim, grey streets of post-war Bonn are brilliantly portrayed. The upper-class prejudices and pomposity of the senior embassy staff harks back to an era when Britain was a super-power, yet is now being exposed as a second-rate has-been.

Reading this in Bonn made the novel even better. But reading it at a time when the European Union, the capitalist club that arose from the Common Market, is reeling from political crisis; as right-wing politicians threaten political stability across the continent, gave A Small Town in Germany an extra sharpness. The political establishment had little room for manoeuvre in the fictional Bonn of the 1960s. I'm not sure they are in a much better position today.
Posted by Resolute Reader at 6:59 pm