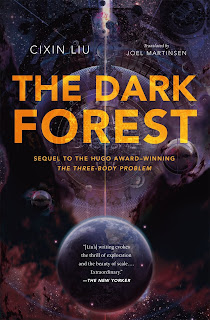 Volume two of Cixin Liu's science-fiction trilogy is a brilliant follow up to his earlier Three Body Problem. In fact, that first novel, excellent though it is, serves in my opinion merely as an introduction to this far sharper story.

Readers of my review, or the first book will recall that humanity is faced with an existential threat - an alien invasion force, travelling at sub-light speeds is heading for Earth with the complete destruction of humanity as its explicit intention.

At the heart of this book is a study of how people react to the potential threat. Earth is limited by the restrictions the alien Trisolarans have placed on its scientific and technological development. Rather brilliantly, Liu's aliens are not simply humans with different exteriors as so much science-fiction has it. Instead they are completely alien, so much so they give humanity a single advantage because they cannot conceive of communicating anything other than their thoughts. So the human ability to think one thing and say another, is incomprehensible to the aliens.

With this in mind (ha ha) the United Nations conceives of the wall-facer plan, a group of brilliant individuals who are to come up with strategies to defeat the alien invasion, without letting the enemy know their plans. The story of the wall-facers is the core of this novel, the backdrop though is almost as fascinating. This is how the threat of alien destruction changes the wider social atmosphere on Earth. Despair, economic crisis, over-reliance on technology and faith in the military all take their toll.

Unlike many trilogies, this second volume is deeply satisfying in its own right. I eagerly await book three.