James Hunter - Set Adrift Upon the World: The Sutherland Clearances 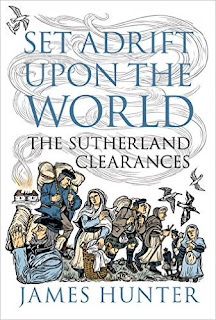 This study of the part of the Highland Clearances that took place on the Sutherland Estate in the first quarter of the 19th century makes for an important new book. James Hunter locates the Clearances, infamous for the role of Patrick Sellar and the Marquis and Marchioness of Stafford (later the Duke and Duchess of Sutherland), not as part of an inevitable economic development, but as a brutal part of the class struggle in the Scottish Highlands between landowner and tenant.

As a consequence the author shows how the modern Scottish landscape, enjoyed by thousands of tourists every year, has been fundamentally shaped by this struggle. A landscape that resulted from centuries of farming, was in turn transformed by sheep farming and a later switch to grouse and deer. Thus the "natural" landscapes are not natural in the slightest, they are the result of centuries of human labour and the victory of a tiny number of landowners over thousands of farming families. The homes, schools and churches that were used by thousands of people now lie buried and forgotten with the soil itself tainted by the blood spilt during the evictions.

Hunter notes that the Clearances had their origin in the way that capitalism was transforming how landowners could make money. This meant that those who wanted to "improve" the land and make more money were


rather like settlers on some North American frontier... at the cutting edge of an increasingly commercialised civilisation's advance into a region where older forms of social organisation remained the norm.... The clash, to be sure, was a lot less violent than analogous conflicts between homesteaders and Native Americans. But the issue at stake in this Sutherland collision was the same as that posed by North America's frontier fighting: which of two incompatible ways of life was to prevail?

It would be wrong to take this analogy too far. The tenants of the Sutherland Estate were not hunter-gatherers, or even pre-industrial societies. Nonetheless their methods of farming and their social organisation were a barrier to the maximisation of profits from the land. This is not to say they were backward, primitive, lazy or perpetually poor (all accusations thrown at them by the improvers and their propagandists). In fact, one of the strengths of this book is that it demonstrates the exact opposite.

Those at the forefront of the evictions, like Patrick Sellar, used this propaganda to justify to the world what they were doing. Describing those being cleared from land their families had farmed for generations as "barbarous hordes" and "aborigines" was to justify the same sort of terror that had been deployed against Native Americans, First Nations peoples and other victims of colonialism. And terror it was. The deaths, the destruction of "homes, barns, kilns and mills" in defiance of the law, the burning of homes with people still inside, the abuse of due process and the deliberate destruction of materials so that those evicted lost even the chance of rebuilding elsewhere was nothing less than terror.

Today, the scale of the Clearances still has the power to shock. In 1819 to 1820, for instance, some 5,500 people were forced from their homes in Sutherland. In one part of the estate, between 150 and 200 distinct communities were replaced by a mere eight landholdings. Many of those evicted ended up in far inferior coastal locations were they were expected to take up industries (like fishing) of which they had no knowledge and in unsuitable locations, lacking harbours to supplement meagre incomes from the smaller and less arable new plots of land.

It is no surprise then that people fought back. The book opens with the story of a mass protest that turned away surveyors. Real or threatened protests, demonstrations and the possibility of violence clearly terrified the landowners and their representatives (though not the potential for violence against former tenants). The scandal caused by the first set of Sutherland Clearances provoked enormous criticism of the Staffords, aided by journalists and campaigners across Britain.

There's no doubt that in an era of popular anger at government and the ruling class (James Hunter notes that military force was not used on a number of occasions because the army and government were frightened of another Peterloo) there was massive sympathy for the inhabitants of Sutherland.

Because the resistance was unsuccessful, former inhabitants were spread "adrift upon the world". Hunter traces those who ended up in North America and Canada, and their struggle to survive the passage across the Atlantic and the harsh winters. Many of these families eventually thrived, and there's a poignant report from years later, of some of those who remained in Scotland wishing that their families had made the trip.

Despite the bumper profits to be obtained from sheep farming, it didn't last. The arable land that initially provided for fat animals was the result of years of careful farming. When the soil fertility dropped, so did the sheep profits and a switch to grouse and deer was the only way to maintain profits. This did little for the landscape however, which continued to be empty. As one commentator wrote in the 1840s, after travelling through the area:


All is solitude within the valley.. except where, at wide intervals, the shieling of a shepherd may be seen; but at its opening, where the hills range to the coast, the cottages for miles together lies clustered as in a hamlet. From the north of Helmsdale to the south of Port Gower, the lower slopes of the hills are covered by a labyrinth of stone fences, minute patches of corn and endless cottages. It would seem as if, for twenty miles, the long withdrawing valley had been swept of its inhabitants and the accumulated sweepings left at its mouth, just as we see the sweepings of a room sometimes left at the door. And such generally is the present state of Sutherland.

The land had been, "improved into a desert". Karl Marx, an observer from afar of the Clearances, noted that "the history of the wealth of the Sutherland family [was] the history of the ruin... of the Scotch-Gaelic population".

James Hunter ends by pointing out that the present emptiness of the Highlands is something of a strange aberration and that one day the places that had been cleared will be full of people again. While this may or may not be true one day, it is an important reminder that the countryside we take for granted is not necessarily a pristine one, but rather is in the process of constant change. The Clearances, like the Enclosures in England that cleared landscapes, destroyed communities, and transformed people into wage labourers, were part and parcel of the emergence of a system that puts people before profit. The importance of James Hunter's book is that it shows this was not inevitable, nor necessary. In doing so he rescues the stories, and frequently the names, of those who would otherwise be simply remembered as victims of the greed of the Duke and Duchess of Sutherland.

Sharp - In Contempt of All Authority
Hutchinson - Martyrs: Glendale and the Revolution in Skye
Cameron - The Ballad and the Plough
Richards - The Highland Clearances
Posted by Resolute Reader at 7:32 pm