A.L. Beier - The Problem of the Poor in Tudor and Early Stuart England 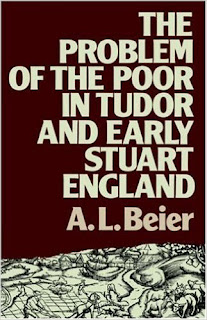 This short book is a detailed contribution to the discussion on responses to the question of the poor in early modern England. The question is an important one, because on it hinges the way that the state tried to both conceptualise the question of poverty and deal with it.

We are used to thinking of early modern society as poor. But that's a perception that probably comes from us contrasting imagined life for the majority of peasants with our own lives today. But poverty was a much deeper part of Tudor and Stuart life, and reached far into society. So Beier's can write that "reliable" tax records


suggest that a third to a half lived in or near poverty in the 1520s and again in the 1670s... thus England began the Tudor and ended the Stuart age with a great army of needy persons, possibly the majority of the country's inhabitants.

There were of course short term fluctuations, which depended mostly on the success of the harvest. We know little about what life was like for the poor, though as Beier points out it was hard. We can get some indication from prices and wages. Between 1500 and 1650 there was a "sustained" rise of about 4 percent in prices for this period, but "real wages for agricultural and industrial labour actually fell by up to 50 per cent in the period". This was closely related to the growth in population which produced a surplus of labour holding wages down.

A bigger question was that of enclosure and engrossing (the enlargement of farms) both of which tended to drive people from their land. The population at this time was surprisingly mobile and workers often moved on from employers seeking better wages. The scale of poverty (and know doubt the regular revolts against enclosure) meant that the state had to act, Beier's argues that


there was no solution to the Tudor and early Stuart poverty problem, short of a social revolution (always a remote possibility) in which wealth and power were radically redistributed. Just the same, officials intervened precisely to ensure that that did not happen.

While the author argues many individuals were generous to the poor, the poor collectively were seen as lazy and wasteful, as well as potentially rebellious. Beier argues that there were three lines of thought that led to state action on poverty. One was the fear of rebellion. The other was the belief that society was an "organism" were each section of it played a role in keeping the whole healthy. The third was what Beier calls "Renaissance humanism", a belief that the poor could be improved by education and assistance - though in particular this meant attacking "idleness".

State action meant the passing of acts forcing local authorities to raise taxes to tackle poverty. This was mainly through paying the poor "weekly cash doles" but also the provision of "housing, medical care, clothing, fuel, apprenticeships... education and burial expenses" if needed. Beier's argues then, that by 1650 there was


a powerful weapon for checking poverty on a national scale, funded by statutory taxes and administered by state officials. In the Europe of 1650 that was no mean achievement and undoubtedly contributed to England's long-term social stability compared with other states.

While I'm sceptical of his conclusion, its is no doubt true that the state had put in place mechanisms for dealing with poverty, though this was mostly of the form of supporting those in poverty, rather than raising them out of it. Alongside this action were laws to restrict movement and changing of employment and to control "dangerous trades" particularly those who travelled about, like peddlers, who could spread discontent. This helps to underline the main reason for state driven assistance for the poor. It was not to end poverty, indeed its doubtful that many in the Tudor or Stuart ruling class believed this possible, or even desirable. Instead it was to protect their own position. As Beier's concludes in this useful, if short study,


it is unlikely that the position of the poor was transformed by weekly doles and the rest, any more than that of today's is by social security payments. But for the ruling elites who instituted and administered the legislation, the poor-laws had positive results. They protected them from a host of disorders that might otherwise have threatened their social supremacy.

Those ruling elites didn't survive the next half century. And, as the British government is currently eroding the welfare state, it is worth remembering that the origins of the poor laws and welfare lie in ruling class fear of those at the bottom of society.
Posted by Resolute Reader at 8:49 pm