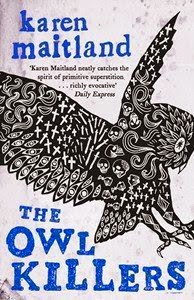 The medieval period is not a common setting for novels, and when used, novels tend to concentrate on the lives of the ruling classes, kings, queens and their battles. Karen Maitland's The Owl Killers however focuses on the lives of the inhabitants of a single village in Norfolk. Maitland has an eye for period detail and the novel is extremely readable, and an excellent insight into peasant life in the early 14th century.

At the focus of the novel is a Beguine - a female only religious commune whose inhabitants have control over their own lives and money, a free space to practice religion and charity, work and help wider society. Beguines were setup on the continent from the 13th century onward, and Maitland imagines what happens when a group of women from one in Bruges attempt to setup in England.

The England in which they arrive is far from idyllic. The women are shocked by the reality of peasant life, perhaps having been hidden from the reality of it in the economically prosperous city of Bruges. The peasants are trapped by their obligations to both church and lord. Their lives are hard; taxes and tithes are high. Their lord isn't particularly benevolent, and his heir is viciously nasty. For these local rulers the peasants are a source of wealth, labour and entertainment. Rape is common, violence frequent. Religion plays an important and central role, though local customs and religious belief have created a secret society of Owl Men, who promise to protect the village in times of scarcity in exchange for yet more monies.

One fantastically drawn character is Father Ulfrid. Ulfrid is triply trapped. Forced out of the big city for unacceptable crime, he is stuck in the village and hates the small minded, superstitious people who he now preaches too. But he is also trapped by the contradiction of his faith and his social position. His role as priest means he is the sharp point of the church that collects the heavy tithes owed by the peasantry. Thus he is on one hand an instrument of exploitation and with the other the person who should be helping the peasants deal with the reality of their lives. Initially a sympathetic figure, Ulfrid rapidly becomes more obnoxious as he sees the women of the beguine as the solution to his problems.

Maitland writes a complex story, using multiple view points and basing it around the crisis that ensues as heavy rains and disease cause disease and famine. There is little redemption here, the novel's concentration on reality makes a happy ending likely - peasants did die in their hundreds from hunger and oppression.

Sadly Maitland's turn towards the supernatural at the end did the story no favours at all. Those who have read the book will probably agree that it was unnecessary. The monstrous Owl Man who haunts the villagers' fears is a clear metaphor for the violent rule of the local lord, it didn't need to be made real.

That annoyance aside, this is an immensely enjoyable novel that gives the reader a real sense of the crisis inherent in 14th century England. A time when hunger was driving the peasants to question the role of their rulers, the Church's greed was creating the beginnings of religious controversy and questioning and the countryside simmered with tension and violence.

Maitland - Company of Liars
Posted by Resolute Reader at 1:24 pm