AW Zurbrugg - Not Our War: Writings Against the First World War 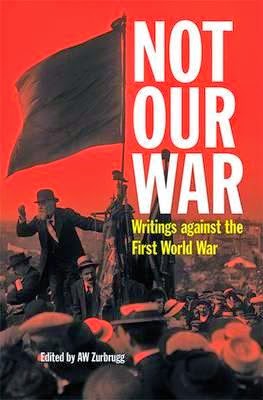 This fascinating collection of writings and speeches is the perfect antidote to those that want to downplay the anti-war feelings that existed during World War One. It is also an excellent resource for those studying the anti-war movements, the socialist and anarchist opposition and the developing rebellions and revolutions against the slaughter. In making this material available, Merlin Press have down us all an immense favour. The editors commentary is also very useful, providing background and sources for further study.

Much of the book is taken up by extracts of speeches and writings. Some of these, like Rosa Luxemburg's Junius Pamphlet will be familiar. Others, like the words of Scottish socialist John Maclean or various European Anarchists and pacifists will be less well known. Some of the material is translated and published in English for the first time. All of them are interesting, some because they demonstrate the clarity of thought amongst those who opposed the imperial war and others because they illuminate the hopes and fears of the ruling class. Here's an extract from a South African newspaper, fearing what would happen to colonial troops if they were used against Germany,

"If the Indians are used against the Germans it means they will return to India disabused of the respect they should bear for the white race. The Empire must uphold the principle that a coloured man must not raise his hand against a white man if there is to be any law or order in either India, Africa or any part of the Empire... it will mean the natives will secure pictures of whites being chased by coloured men and who knows what harm such pictures may do?"

or words from the French Prime Minister, Georges Clemenceau:

"I would prefer that ten Blacks are killed rather than one Frenchman - although I immensely respect those brave blacks, but I think that enough Frenchmen are killed anyway and that we should sacrifice as few as possible."

Many of the extracts deal with those revolutionaries, socialist and anarchist trying to understand why the majority of the left movements ended up supporting their own ruling class, despite the enormous desire amongst working people before war broke out for peace. Frank Bohn, an American socialist gets to the heart of the problem when he declared

"With a vast majority it has been a matter of salary, of the commonest sort of economic determinism... This whole crowd began life as poor, hopeless lawyers or school teachers... who would no more think of losing their position in life than they would of going into the streets naked."

He continues that within the Germany socialist party, there were (of 900,000 members),

"perhaps one hundred thousand [who] were really socialists. If these had stood alone, with a press and a leadership devoted to revolutionary ideals, there would have been no war."

But revolts and opposition grew and the best part of this collection are the speeches of those who organised and built that opposition. In Russia, the working class overthrew its governments and monarchy and created the first workers' state. In Germany revolution and mutiny brought down the Kaiser and put an end to war. Elsewhere, in Glasgow, Sheffield, Dublin and a myriad of other places, the struggle reached new heights. Sadly, they didn't break through to victory, but those taking part recognised, as James Connolly did that,

"The carnival of murder on the continent will be remembered as a nightmare in the future, will not have the slightest effect in deciding for good the fate of our homes, our wages our hours, our conditions. But the victories of labour in Ireland will be as footholds, secure and firm in the upward climb of our class to the fullness and enjoyment of all that labour creates, and organised society can provide. Truly, labour alone in these days is fighting the real war for civilisation."

It is a great pity that the socialists of the early 20th century succumbed to nationalism instead of taking a firmer stand en masse earlier.