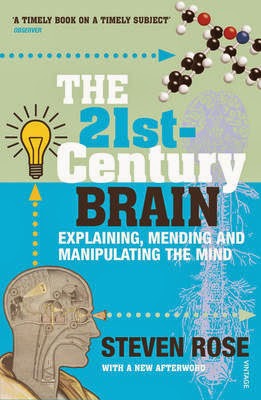 How does the peculiar lump of grey matter in our head think? How does it store memories? How does it enable us to breathe and swallow, to hold things, to flinch from pain? Is our brain the same as that of a monkey? Can single celled animals learn?

All these fascinating questions are addressed by Steven Rose's enormously enjoyable 21st Century Brain. Where possible he answers in a style that mixes detailed science with accessible writing. Where we don't know, Rose tells us how close we are to finding out, but most importantly he tells us how science got to where we are today. He also is quick to point out the problems with much of the historical research into the brain, and were problems remain today.

For the dialectical scientist, the brain is not simply an unchanging lump of matter. Rose is keen to emphasize that the brain, and its functionality, is part of an evolving, changing structure that has a history. This history has shaped the physical structure of the brain, but it has also shaped how individual humans think, remember and learn. Key to this is of course evolution, and in some of the most fascinating science writing I have ever read, Rose traces the likely evolutionary development that takes us from the soup of chemicals on the very early earth, through small cellular animals and to today's complex animal brains. Studying human brains "reveals their ancestry. Their basic biochemistry was essentially fixed at the dawn of evolutionary time, with the emergence of cells." Though obviously the has been enormous evolutionary development since then.

But there is a further history, the brain doesn't arrive full-formed in a new-born baby. It develops and grows, and this process is almost as fascinating and the breathtaking story of evolution. Importantly, for Rose, "nothing in biology makes sense except in the lights of its own history." The brain itself is a "marvellous product and process, the result of aeons of evolution and for each human adult decades of development." This idea of the brain as a process is a particularly important one for Rose, who sees its working as ever-changing, developing and growing, rather than a static, fixed set of structures and material. 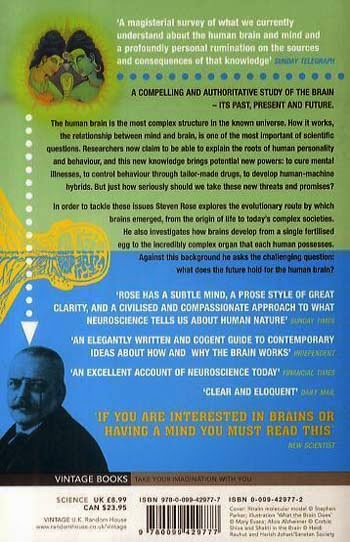 We might think that the brain is a collection of specialist areas. With a bit that deals with seeing, a part that controls walking, and another for memory. While this is how the brain was often thought of historically, scientific evidence doesn't bear this out. As Rose says,

"One must consider the workings of the brain not merely in terms of three dimensional spatial anatomical connectivity but in the time dimension as well. Cells that fire together bind together. Once again, the message is that brain processes depend on history as well as geography".

The book deals with the development of the brain, but also its ageing process, including disease and death. The final chapters of the book look at attempts to deal with disease or memory lose. But Rose challenges those who simply see these problems as simply ones of chemistry, looking for the perfect drug or fix. Reductionist medicine, as he calls it, that "seek the explanations of many of our troubles in the presence in our brain of such malfunctioning molecules". Such medical procedures also lead to a situation where, US researchers are apparently trying to understand the neural processes involved in choosing between Coke and Pepsi.

This contrasts with Rose's understanding;

Rose's book is a fascinating one. He wears his politics clear, raging at those that look for genes or patterns in the brain that suggest individuals are prone to violence, or crime, but don't consider those who drop bombs on Iraq as behaving wrongly.

But it is also Rose's politics that help shape his vision of the dialectic between humans, biology and society. Indeed his book finishes on a hopeful note, precisely because his vision of medical science is not one constrained by finding the correct pill or drug, but sees our biology as part of something much wider.