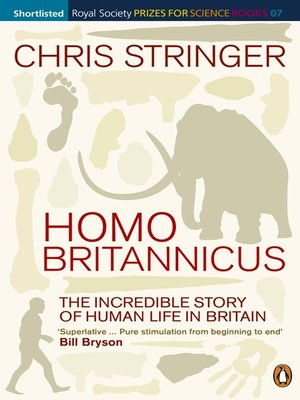 Chris Stringer's Homo Britannicus is a short, popular introduction to the history of humans living in the region that we now know as the British Isles. Anyone silly enough to infer from the title that this is a history that gives justification to the lunatics of the far right who believe that being British means tracing your ancestry back to some far distinct British caveman, will be disappointed. Instead what Stringer does is to present the evidence that humans in Britain have come and gone over an immense period of time, stretching back to well before the most recent Ice Age. In addition, the geography of Britain has changed substantially - not just from changing sea levels, but also through the erosion of a chalk ridge that connected south east England to north western France.

Human history goes back a long way, and Stringer takes us through the complex and often conflicting scientific evidence for our earliest history. The timescale is enormous. We have clear evidence that early species of humans were using stone tools in Africa more than two million years back. Even in British sites, evidence such as the "vole clock" place the tool use at one site as long ago as 700,000 years.

The "vole clock" is one of the fascinating examples of the archaeological process that Stringer uses to illustrate how scientists know so much about the ancient past. Here, the different species of voles, known to have evolved or gone extinct at specific points in the past, are used to date contemporary human remains. Much of the book is based on the work of the Ancient Human Occupation of Britain (AHOB) project. Indeed the last section is a series of descriptions of those involved in the project, and how they came to work in this career. It is notable that only one of the AHOB scientists is a woman, reflecting a wider problem of female under-representation in science.

Stringer tells us the story of human history (as well as that of our cousins such as the Neanderthals) but he also tells us about the voyage of discovery that science has also gone through. From early scientists trying to explain the presence of hippo bones in England or linking the age of the Earth to Noah's flood, Stringer shows us not just what we know, but how we know it.

For anyone wanting an entertaining introduction to our early history, as well as insights into the work of archaeologists, there probably isn't a better book. While the section on climate change at the end felt a little like a polemic shoe-horned in, it doesn't detract too much from a more general discussion on the position of humans in a wider natural world. It's also the first work of anthropology that I have ever read, which begins with the description of ancient women and children eating warm, moist hippo brains.

The paperback has some wonderful illustrations, but if possible you might want to try and get the hard-back which has even more photographs and diagrams.

Stringer - The Origin of our Species
Posted by Resolute Reader at 7:13 pm