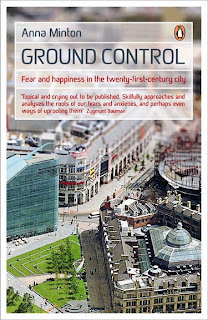 Ground Control is an excellent study of the modern urban space, and the way that neo-liberal politics, post Margaret Thatcher have shaped our towns, our housing and ourselves. Anna Minton begins with that icon of capitalism, Canary Wharf in East London. When I lived in Tower Hamlets the flashing light on the top used to shine straight into my bedroom on a council estate, symbolically ruining my sleep in a metaphor for the destructive power of capitalism.

Canary Wharf symbolises capitalism, but it also is a perfect example of the way that neo-liberal economics benefit only a tiny minority. Those living in overcrowded flats on estates a few minutes walk from the privatised space around the tower's base have got nothing out of the millions spent on the complex around the tower. Built with the idea that economic growth on its own would benefit all, Minton argues that "Trickle down hasn't worked in Docklands... Yet this model endures because of the high rates of growth it beings in good times, even if the benefits are very unevenly spread, entrenching enclaves of poverty as well as wealth."

In order to make it easier for venture capitalists to throw up buildings, shopping centres and the like, Thatcher altered many planning regulations, removing controls and democratic accountability on the process. The result has been a plethora of ill thought out sites that have begun to fundamentally reshape our cities. Sadly New Labour did nothing to reverse these trends, indeed what happened under Blair was "to find a way around planning restrictions, shopping centres have moved wholesale into the centre of cities".

These private shopping centres often have an identikit feel to them. The same shops, designs and even similar names. Minton explores them, and uncovers some worrying trends. Part of this is about access and public space. Like Canary Wharf, few of these new sites are public land and private companies have extraordinary powers to restrict access. Those who don't fit the image or have enough disposable income are removed. The designs themselves, lacking seating or atmosphere don't encourage the elderly or infirm to sit and relax. That would give the wrong impression. As one manager tells Minton these spaces are not about people, they are about profit:


We're a commercial organization which retailers invest in to improve the retail environment. It's nice to make it clean, but we're not doing it for the community agenda, we're doing it for the bottom line.

Contrast this approach with the results of a 2007 study by the Joseph Rowntree Foundation that looked at how people used public space. It found "that one of the most important functions of public space is to allow people to 'do nothing'... an 'essential role which shouldn't be eradicated'."

Minton explores many other aspects of urban life. The way that long standing communities have been broken up in order to re-market areas or sell homes to others for higher prices. Again a vision of reshaping cities in the interest of a minority, not the existing communities. Minton, like Owen Jones in Chavs locates the problems today in the lack of public housing as being rooted in the decision to allow council tenants to buy their own homes, but prevented councils reinvesting this cash in the building of further homes. Minton develops the vision of public housing much further, arguing that the original idea of mixed areas would still serve us well today. A mixture of families and couples or individuals, with different backgrounds and social positions would help to create a much better and enjoyable community atmosphere.

A central, and fascinating part of the book is Minton's exploration of gated communities, a subject that she has spent some time studying and writing about. She shows how those who live behind gates and bars, fearing the outside world, reinforce their fears and stereotypes - becoming more isolated and more worried. Combined with an analysis of the way the media systematically over reports declining violent crimes, Minton shows how certain sections of society have become more and more fearful of the wider population, with very little reason. Shades of the Victorian fear of "the mob".

This is a readable and fascinating book. Unlike some other books I've read recently on modern cities, Minton begins with those who live, work and play in the areas. So she interviews and follows council workers, bored youngsters and those on council estates in the shadow of Canary Wharf. She also introduces us to those who have struggled against the developers and campaigned to defend their communities.

My over-riding conclusion after finishing it however, was that the real barrier to the sorts of communities that we would all love to see, is a system that puts profits first. Anna Minton's excellent book is a good explanation of what is wrong with urbanisation under capitalism and offers some fascinating insights into how things might be.

Jones - Chavs
Hanley - Estates: An Intimate History
Hollis - Cities are Good for you
Robbins - There's No Place
Posted by Resolute Reader at 11:07 pm