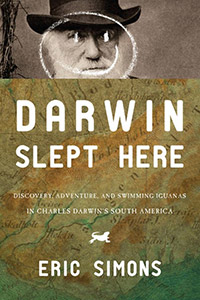 While this book will contain little for evolutionary scientists or Darwin scholars, for those who like their travel books to be a little more than stories of visiting unusual places and gawping at them, it is interesting enough. Eric Simon's is travelling in South America when he stumbles across a copy of Charles Darwin's accounts of his own travels around that continent, The Voyage of the Beagle.

When I read Voyage myself, I was struck by Darwin as a person. Taken direct from his own diaries, the trip is as much a voyage of scientific discovery as it is the tale of a young man grappling with his own ideas and thoughts.

Simon's decides to try and follow in Darwin's footsteps. While this means trying to locate obscure valleys or buildings from descriptions that are over a hundred years old, it also means grappling with some of Darwin's thoughts ideologically and scientifically. There is very little hear about the scientific ideas. Simons dwells mostly on Darwin's thoughts about slavery, which he hated. In trying to understand this, Simons comes to realise that much of the history of the region has been lost. In particular, the story of the impact of European colonialism upon the indigenous peoples of South America has been forgotten, or perhaps distorted. In one tourist video Simons sees at a distillery in Chile, the subtitles inform the tourist that "The indigenous people had developed a culture perfectly suited to receive the Spanish settlers".

This of course fits the narrative that the people of the majority of the world were fit to become the ruled, rather than run their own lives. Darwin himself grappled with the complexities of these ideas. Complex not because they are difficult, but because challenging things like racism meant challenging the Victorian world view. Something that Darwin was to prove more than fit for later in life, though in his earlier twenties he was still learning.

Simons' is keen to bring to life the story of the young Darwin, excited by travel and exploration, amazed by the world around him, on the cusp of greatness and scientific breakthrough. Darwin Slept Here won't detain the reader for long, and it will ably prepare them for reading Darwin's own travel accounts, which should be the next step.

Darwin - The Voyage of the Beagle
Posted by Resolute Reader at 8:48 pm

I picked this book up after you mentioned it (hurray for gift cards), and found it to be an immensely readable biography slash travel book while never really being sure which of the two the book actually was at any one time.

As a theme, following Darwin's travels seems simple. However, due to the time period and lack of development when Darwin was there, it is understandable that traces of him are difficult to find. What I think Simons did really well was to connect the young Darwin (with his "curious spirit, but not an activist one") to the events of 1830s SA and today, while at the same time providing hypotheses as to how it was that during this trip Darwin's ideas for the origin of the species were being developed and tested. It is this set of connections that I think helps ground Darwin as somewhat more human than some genius who came up with one of the most important discoveries of all time.

My only complaint with the book is that it could have done with more photographs or drawing of many of the plants, animals and paintings mentioned to further place the reader in place and in time.