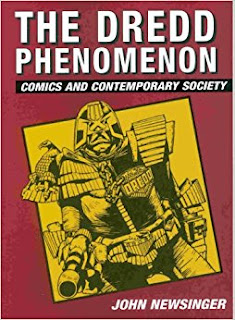 There is a large part of me that never really got into comics. Partly this was due to a slightly snobbish, middle class attitude that my have existed during my early youth. They were not proper books, so they can't have been anything more than simplistic entertainment. Radio 1 to literature's Radio 3.

Later on, I discovered 2000AD. It's cynical social commentary made it clear that there was something more to comics and graphic novels than those who assumed it was all the Beano might think.

John Newsinger's brief survey of comics is locates them in the the periods when they are being penned. Written in the immediate aftermath of Tony Blair's election in 1997, he firmly roots the popularity of Judge Dredd and 2000AD in the writers' ability to extrapolate from the authoritarian social policies of Thatcher, Major and then Blair.

You can see this most obviously, and perhaps slightly crudely, with the B.L.A.I.R.1 strip which I found immensely enjoyable in 1998. Here Blair is a robotic monster, driving through his plans and wrecking people's lives to make Britain safe for big business. It is only with tongue slightly in cheek that the writers introduced Judge Straw into the mix.

Newsinger argues that the popularity of comics like 2000AD is their ability to hold a lens up to the world. Whether this provokes the readers into further confrontation with the priorities of the politicians and policies that are so elegantly subverted in the stories is another question. Certainly their popularity can only be because most readers spot a little part of the world around them in the panels. I'd forgotten how detailed some of the stories are. In one, Newsinger points out, the Judges, lawmakers, enforcers, judge, jury and executioners, recognise they need to liberalise their policies or risk loosing complete control. They decide to remove the prescription on keeping Goldfish from the list of crimes that can be committed. Though breeding Goldfish still requires a permit, least it gets out of the control of the state.

So the contradiction - that one of Britain's most popular comics has as a hero a semi-fascistic policeman is squared because it is clearly about tackling the excesses of other aspects of 20th and 21st Century capitalism. Other stories, writers and comics mentioned here-in The Preacher, The Invisibles, From Hell and the ABC Warriors also take up other contemporary issues - crime, drugs, religion and violence. They are part, Newsinger argues, of a reaction to those comics that are pure escapism.

Newsinger has a convincing case. Hopefully this book, which has not dated at all since the heady days of 1997, will continue to encourage a critical reading of comics and more of a enjoyment of a wider range of slightly less mainstream graphic novels than your parents might expect.

Newsinger - The Blood Never Dried: A People's History of the British Empire
Newsinger - Fighting Back: The American Working Class in the 1930s
Newsinger - Them and Us: Fighting the Class War 1910-1939
Posted by Resolute Reader at 12:02 pm

i also wish i had gotten into comics a bit more.