E.P. Thompson - The Making of the English Working Class 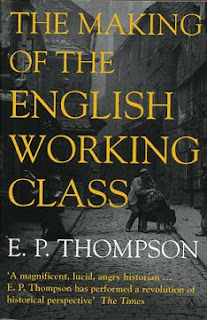 E. P. Thompson's monumental work of history of the development and shaping of the English working class almost defies review. After all, in almost 1000 pages he covers so much ground, in such great detail, that it feels inappropriate to even attempt to mention an section for fear of glossing over something equally important elsewhere. Hundreds of words could also be written about Thompson's methodology. His approach is more than history from below, it is about analysing cause and effect in history, imposition and resistance, the dialectical interaction between social forces that shapes the present and the future.

Thompson wrote as an avowed Marxist. Marx wrote that "being shapes consciousness" and this little quote perhaps explains the core idea of Thompson's work. The making of the English working class, is not a conscious activity by any one group, least of all the working classes themselves. Rather Thompson describes a world changing as new interests and forces come to the fore - in this case the growth and expansion of industrial capitalism. This changing circumstances changed the interests of the ruling class (indeed, to a great extent it changed the very personnel of the ruling classes as aristocrat was replaced by industrialist) as they needed to increasingly exploit workers to extract profits.

But this process didn't automatically create a working class, other than in the simplest of senses that it produced workers in factories, workplaces and elsewhere. What Thompson is trying to understand is the growth of workers and their self-conscious identity as such, compared to the other classes and interests in society. To do this Thompson documents the struggles of people to resist changes to their lives. To pick a random example, Thompson looks extensively at the Luddite movement.

The Luddites are often picked as representing some group of anti-technological, backward looking rebels. They'd rather wreck-machines than be part of a forward moving society. Yet the Luddities held the sympathies of the majority of people in the villages and towns that they came from - the organisation, Thompson tells us, was in "Nottingham and Yorkshire... so opaque that it resisted all penetration". The Luddities, rather than looking backward were resisting the imposition of machinery that would  destroy their lives. In many cases they were happy to accept new technology, so long as those who lost out were compensated and looked after, rather than being left to starve.

Thompson says "Luddism must be seen as arising at the crisis-point in the abrogation of paternalist legislation, and in the imposition of the political economy of laissez faire upon, and against the will and conscience of, the working people."

It is this sense of the imposition of new forms of capitalist organisation upon a people that dominates the book. What also repeatadly comes through is the resistance. In particular the methods of organisation used over decades by those at the bottom of society to try and fight for their own interests, or retain existing rights. Thompson shows how the ruling class was in fear of insurrection and terrified of working class organisation. Whether its the Corresponding societies or debating clubs, or nascent trade unions, the establishment tried to penetrate, destroy, murder and lock-up those who organised. Some of the most interesting parts of the book are those were Thompson describes the extent to which the government introduced spies to seek out insurrection and how those spies helped create an atmosphere of imminent revolution in order to justify their own existence.

The brutality of repression is here too. The massacre at Peterloo, the hanging of those who organised, the transportation of those who dared to speak out, or sell radical literature, or called for the vote. But a system that uses violence in this way cannot continue forever and reform did come eventually, but in a way that helped inspire further revolt.

Thompson finishes the book on the eve of great industrial revolts. By the 1830s the working class had, through the struggles, defeats, betrayals and victories become a class "for itself", increasingly understanding it's position in society and that of its rulers and beginning to grasp towards an alternative way of organising. This is the time of the Utopian socialists, men like Robert Owen  who had not yet come to a full understanding of the need to replace capitalism, but who had created the basis for a set of ideas that could do so.

The Making of the English Working Class will continue to be debated by historians. Even for those who disagree, it's scholarship and clarity should be a marker for other history writing. But with this work, perhaps more than any other in British social-history, Thompson laid the basis for an understanding of were those who struggle for freedom and justice today come from.

The men and women in these pages, from Colonel Despard and Tom Paine, to the unnamed pamphleteers and bill-posters, to those who drilled with pretend pikes high on the moors, believing that their day was coming, should never be forgotten. Their dream of a better world, is also ours.

Thompson - Customs in Common
Posted by Resolute Reader at 9:09 pm

This book is in my humble opinion an absolute classic. And your review is a superb introduction to it. Reading the book I found it to be everything history should be. You would have to be an expert or an iodeological opponent to pick holes in such a book. Many thanks for sharing your excellent review. And thanks for tweeting in response to my tiny comment on the Farrell. 'The Siege of Krishnapur' is becoming remarkable very quickly.