Marcus Rediker - Between the Devil and the Deep Blue Sea 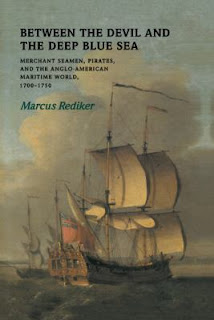 Marcus Rediker's book is subtitled "Merchant Seamen, Pirates and the Anglo-American Maritime World, 1700-1750". It would seem to be a niche area of interest, but as with his other history writing, Rediker explores far more than the narrowness of his title suggests.

The world of the early 18th century was a very different place to the one we inhabit today. Capitalism, has now spreed to every corner of the globe, but then it had only taken deep root in Western Europe and the Eastern Seaboard of the North Americas. Much of the rest of the world was something to be exploited and plundered by the more power Western powers. In this world, shipping was of great importance. For the trading of everything from foodstuffs to slaves, raw materials to emigrants, you needed ships and their crews.

Without sailors, ships didn't sail. A fact that sailors understood well and frequently used to their advantage. The world of the sailor was a cruel and vicious one. Captain's had virtually limitless rights to punish and even murder the crew. The law courts appeared to offer an impartial restriction on the violence of the captain, but in reality the courts (and the rest of the state apparatus) sided most often with the interests of capital.

In this context, the life of the seaman was an brutal one. It was brutal because of the violence the captain dished out in order to maximise the profits of his voyage. It was brutal because of the constant attempts to undermine the life of the seaman in the interest of further profits - the reduction of rations, the withholding of wages and the fines for the most minor of misdemeanors. It's no surprise that sailors fought back. They cursed their officers, occasionally they struck back and sometimes they mutinied and turned pirate. This review isn't the place to discuss further Rediker's fascinating depiction of pirate life in the early 18th century. Suffice to say Pirates were far from the swashbuckling heroes of our TV screens. They organised a collective lifestyle that is the exact opposite of the hierarchical ship life they had left behind. They had elected officers, accountable to the crew and though feared, the vast numbers of pirates on the seas frequently avoided fighting altogether.

The heart of Rediker's book though, is an attempt to explain the changes going on in the world of work, which the sailors were at the forefront of. Seaman, Rediker argues, were the first workers to loose their individual identity in the way that we understand today. They no longer owned their own tools, but had become a small cog in a collective machine. They had no control over the means of production but sold their labour power for the best deal they could get. They were driven together into a collective environment, lorded over by a master whose job was to squeeze every last penny of profit from their sweat.

"for all of these men, self-protection - from harsh conditions, excessive work, and oppressive authority - was necessary to survival. Too often... 'all the men in the ship except the master' were 'little better than slaves.' Social bonds among sailors arose from the very conditions and relations of their work. These men possessed a concrete and situational outlook forged within the power relations that guided their lives. Theirs was a collectivism of necessity."

And they used their collective power to great effect. "In 1729 the seamen of the Young Prince, when ordered to heave anchor, 'one and all...unanimously agreed to stop & swore Goddamn their Bloods if they would heave the Anchor or go any further with the said Ship but would go on Shore'". Rediker points out that the very world "strike" originates with the sailors who "struck" the sails down and refused to allow a ship to sail.

This collective nature of work, as well as the international character of their work, meant that sailors were at the heart of struggles, protest and demonstration along the whole of the Atlantic seaboard. Rediker argues that it isn't to fanciful to suggest that the very notion of "rights" developed as a result of the political input of sailors with their new collective identity to early land-based struggles.

So the story of the seamen of the 1700s is the story of class struggle. An emerging class struggle that reflected the changing economic and political landscape. It was a struggle that expressed itself through dancing and songs. Valued sailors were ones who could work, but could also sing and tell tales. Rediker's thoughtful and fascinating book is important because it allows us to further understand the blood and violence from whence our modern system was born.

But it also reminds us that people always resisted the arrival of capitalism, and all it's most dehumanising aspects, and fought for a different type of world.

Readers might be interested in this video of a speech on Pirates by Marcus Rediker to the Bristol Radical History Group.

Rediker - Villains of all Nations: Atlantic Pirates in the Golden Age
Rediker - The Amistad Rebellion
Rediker - The Slave Ship
Rediker and Linebaugh - The Many Headed Hydra
Posted by Resolute Reader at 3:38 pm