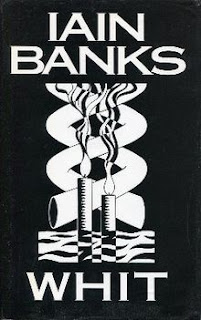 Iain Banks writes two types of books. Science Fiction (as Iain M Banks) and non-SF. But his novels can also be put into two other categories - really good and bloody awful. Luckily, Whit, which I have just read for the second time falls into the first category and is a damned good read.

Isis Whit isn't an ordinary young adolescent. She's the elect of God. However her upbringing on an isolated Scottish farm has left Isis is also naive to the ways of the world. Her religion shuns modern technology, preaches a form of free love as well as believing that certain individuals, born on February 29th are God's chosen.

However, the story of her attempts to rescue a "fallen" member of the religion, via a trip to London and beyond is more than an attempt to poke fun at odd cults and religions.

Isis goes out into the world knowing little about the basics of our society - the police, money, transport, technology. But she also views human relations through the prism of her religious upbringing. Isis' naivety about modern society (as well as human relationships) means Banks' can make interesting comments on almost every aspect of our society - The Police, Pornography, the Media, racism or alcohol and drugs for instance, as well as looking at religion - in it's many forms. Precisely because Isis has the naivey of a child, but is a young woman many contradictions are thrown up. We're left asking who really is living in a weird cult.

Though the ending of the novel feels a little like it's been crammed into too few pages this is an excellent read. I particular enjoyed the confrontation between Isis and the BNP. Now that's anti-fascism....
Posted by Resolute Reader at 11:09 am

This story of Whit belongs in a small genre in science fiction, that which explores and exposes the basic nature of religion. I enjoy such books immensely, and look forward to reading this one, when and if I find it. Thank you.