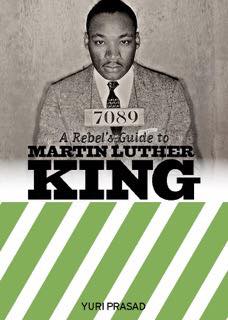 This year radicals will be celebrating the 50th anniversary of 1968, a year of global rebellion. One of the key events of that year took place on 4th April when the civil rights activist Martin Luther King was assassinated by a racist. King's death provoked a wave of furious uprisings, riots and protests.

Yuri Prasad's new book looks at King's political life within the Civil Rights movement. His focus is on how King's ideas changed as the struggle developed. Prasad explains that King never really set out to be the leader he became, and with the benefit of over half a century of hindsight, we can see an element of political naivety in King's early beliefs. As Prasad writes:


King admitted that he had conceived of the fight as being for reform of the system. He thought that, faced with the realities of black rebellion and racist resistance in the South, Washington could be persuaded to act to outlaw segregation, enshrine voting rights and create the conditions in which a true 'brotherhood' could grow.

The Civil Rights movement did win spectacular gains, and King was at the forefront of some of those key battles. But King was also in a contradictory position - between the demands for radical, immediate change, and his need to keep the liberals and the black middle classes on board with his fight. These latter two groups were terrified of revolution, of too rapid a change and certainly didn't want to have their own interests challenged.

The reality of the racist resistance to the struggle for rights and the pressure from below helped push King towards a more radical position. One of the strengths of this little book is that it reproduces some of King's on words, and included is his letter from a Birmingham jail to those who opposed the protests and insisted he show patience and confine the struggle to the courts. The letter concludes "There comes a time when the cup of endurance runs over, and men are no longer willing to be plunged into the abyss of despair. I hope, sirs, you can understand our legitimate and unavoidable impatience".

After President Kennedy's assassination King argued that the movement had to give the new president space, and certainly the establishment thought "the battle against segregation was now reaching a conclusion". But now King buckled. Knowing he needed another victory to keep the struggle alive, he compromised and made a deal with Lyndon Johnson's administration to avoid the march on Selma becoming a confrontation with the police. Prasad quotes those involved at the time and their disgust.

The growing radical demands for "Black power" confused King, and when younger activists challenged him he felt hurt. But King was not someone to keep going in one direction simply because he had always done things in a particular way. Prasad shows King engaged with the growing radicalism and began to shift his own politics. Principally this involved his speaking out against the war in Vietnam at a time when few others had done so. This alienated many of his liberal supporters, but King was right to argue "I could never again raise my voice against the violence of the oppressed in the ghettos without having first spoken clearly to the greatest purveyor of violence in the world today: my own government". He also began to tackle wider questions of class and poverty and in a powerful speech in support of striking refuse workers in Memphis he ended by calling for a city-wide general strike if management did not give in.

This new stage to King's politics was cut short by his assassination. Precisely what would have happened had King not died can only be guessed at, but Prasad does demonstrate that King was increasingly looking to challenge racism through a challenge to capitalism. King clearly was coming to understand that you couldn't end the former without breaking the latter. This focus on the evolution of King's ideas is what makes this short book very special. I highly recommend Yuri Prasad's book as a key read for the anniversary of 1968 and for the struggles against the racist system today.

Related Reviews
Younge - The Speech
Richardson (ed) - Say It Loud! Marxism and the Fight Against Racism

My reviews of other Rebel's Guides