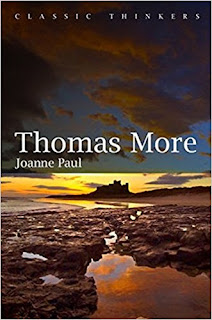 Thomas More was one of England's most important philosophers. A prolific writer and thinker, his writings and ideas are often neglected today with most people knowing him for his role in Henry VIII's court and his most famous work Utopia. So Joanne Paul's new book that explores and rescues More's work is to be very much welcomed.

More's ideas were very much rooted in established ideas, as Paul explains:


More was heavily influenced by the memento mori medieval tradition, which sought to remind people of their death as a way of dissuading them from sinful living. Fore More, the fleeting nature of this life and of what it contains puts one in mind of what is eternal: notably, our equality and commonality. As we are all essentially the same before birth and after death, we should remember these lessons in our daily lives, avoiding the temptation to feel pride in worldly things; after all, our ownership of them doesn't last very long.

But More was also shaped by the changing world that he was living in. Paul points out that the "unsettled world" of the War of the Roses, the "rebellions of the 1490s" would have played their role in shaping his ideas about society. But More was also challenged in his world view by the reformation, and Paul's book makes it clear that More's response to that showed just how well-rounded and thought through More's ideas were.

Central to this was the sense of the "commonality" the collective society to which everyone belonged. More built upon other ancient thinkers to argue that the collective interest was challenged, or undermined, when individuals started to put their own interests first (pride). This meant that an individuals obsession with earthly riches, or private property, was a problem for the whole of the community as it undermined its unity.

As Paul explains, More was in favour of equality, but did not necessarily think that people were equal.


Part of his [More's] critique of the absurdity of social hierarchy was that it was based on the wrong qualities: birthright rather than merit. For More and his fellow humanists, virtue was what should distinguish people in the commonwealth. This was vera nobilitas - 'true nobility'. Inequality of social position, especially in political rule, could be justified, bit not on the grounds of any material difference between people, such as the random circumstances of birth or the artificial value placed on gold.

For such as short book, Paul does an excellent job in locating More's developing thought in the context of those thinkers around him, and those available to him - particularly the ancient Greek and Roman philosophers. I would have liked to have some discussion about More's class position - it is fascinating, for instance, to note that his ideas and debates about private property come in the context of the beginnings of a new rising class of landowner - the beginnings of the bourgeoisie.

The start of a new order (already making itself felt through enclosure in agricultural areas) that put private gain before collective interest was surely a key factor shaping More's ideas. Famously More commented that "sheep... devour men". But More was explicitly not a revolutionary - in fact he despises anything that upsets the smooth workings of the system. As Paul points out, in Utopia More has one of his characters say "the active citizen ought to play his part in the stage play of politics without upsetting the performance, even though he might see through it."

It's this obsession with unity that undoes More when he comes to the Reformation. Unable to side with Henry VIII's changes precisely because he doesn't want to shatter the unity of the church, he ends up becoming an obstacle  that has to be removed. Paul summarises More's thinking:


A citizen 'cannot give his consent' to Henry's supremacy... because 'many foreign places do not affirm;' this supremacy. In other words, as he had indicated to [Thomas] Cromwell, the problem was that England was only a small part of Christendom: the power of deciding over the headship of the church lay with the general council as a representative of the whole body of Christendom.

I was left with the feeling that More was actually a man whose ideas were in advance of the political and economic development of the society he was part of.  More couldn't yet break with a feudal approach to the king and church, one that allowed the mass of the people full participation in society even though he knew it was a worthwhile aspiration.

Developing these ideas would be the task of later thinkers and activists. Having written myself on the Digger Gerrard Winstanley's vision of Utopia, I was struck, as Paul has been, on the similarities of Winstanley and More's ideas of Utopia. But I think Winstanley goes much further than More does - precisely because the society that Winstanley is living in has developed economically much further. Which is why Winstanley places so much emphasis on economic production, unlike More who focuses on ideas.

A small weakness with Paul's book is that she decouples More to a certain extent from the changing economic system he was living in and focuses on his ideas abstracted from society. The Reformation had very real economic roots and neglecting them can lead us to understand the process through individuals and not their interactions with world around them.

The final section of Paul's book looks at the legacy of More's ideas in the Early Modern and modern periods. She notes that More has been adopted by many people, with leading Marxists often claiming his as the first socialist. This I think is unfair, as More wasn't really a communist in the sense that Winstanley was a century later. But More was responding to the changing world around him, and he wanted a better commonwealth for all. So in that sense he remains important to us today. Joanne Paul's excellent and readable introduction will hopefully give a new generation reason to read and debate Thomas More.

Duffy - Stripping of the Altars
MacCulloch - Reformation
Tawney - Religion and the Rise of Capitalism
Hoyle - The Pilgrimage of Grace
Winstanley - The Law of Freedom
Posted by Resolute Reader at 7:22 pm