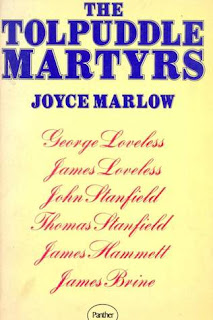 Joyce Marlow's history of The Tolpuddle Martyrs is a classic of its period. It tells the story of the Martyrs well, allowing for occasional bits of speculation by the author. The problem for those writing about the Martyrs is two-fold. Firstly there have been numerous books, plays and articles. Secondly the material itself is relatively thin.

The primary source for most authors are the pamphlets written by George Loveless and four of the other martyrs. Loveless was the key figure in the Martyrs' case, a principled and quietly heroic individual, he wrote a short, very readable, memoir of his role.

Unfortunately this is brief and while detailed in places, Marlow is right to point out that being written in hindsight we cannot necessarily take it always at face value. That said, she puts it to good use and frames a much more detailed account around it. Marlow's additional sources, mostly including contemporary newspapers and legal records help fill out the story.

Like other authors she sees the persecution of the Tolpuddle labourers as very much about an attempt to drive the nascent agricultural union movement underground. Unlike most other writers of the period she also understands that the union movement saw in the Tolpuddle case the opportunity for self promotion. The six men were safe for the union movements' leaders. They weren't violent, they didn't burn down threshing machines and the solidarity movement that grew up to demand their return was the very model of how to campaign within the system.

This is not to downplay the movement. In fact, one of the strengths of Marlow's book is that she has great detail of the solidarity campaign itself. This involved mass protest, systematic petitioning (at least 800,000 people signed one or other of the numerous petitions presented to parliament), hundreds of meetings and the use of public protest alongside of agitation within parliament.

Once free, the Martyrs became symbols of the need for trade unionism, though Marlow points out that in agriculture the government was successful in undermining the union movement. It was forty years before Joseph Arch's agricultural worker's union was the become the site for new battles with the landowners and the bosses.

Marlow's book is an easy read. It's very dated by today's standards, and in places the language would be considered quite inappropriate for a left wing author. But there is plenty of material here, and some useful background reading and history.