Andrew Norman - The Story of George Loveless and the Tolpuddle Martyrs 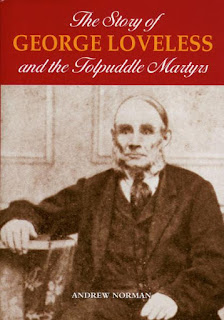 This short and readable account of the Tolpuddle Martyrs focuses on the life of the key figure in their struggle, George Loveless. Loveless was a Methodist minister and Andrew Norman locates his radicalism in the context of that branch of Christianity's break from the staid, pro-government, pro-system approach of the Anglican Church. But whatever George Loveless' religious beliefs he was motivated to try and organise his fellow agricultural workers to counter the appalling rural poverty that they experienced.

Drawing heavily on Loveless' own writings, we see how the Tolpuddle struggle was rooted in earlier, more radical protests. In particular, the Captain Swing rising of 1830, a few years before the Martyrs set up their union. Loveless and several other of the martyrs were part of this movement and its decline led them into the trade union movement. It's also notable that James Frampton, the magistrate who made it his personal crusade to prosecute the Tolpuddle trade unionists was himself a key figure in repressing the earlier struggles. Norman doesn't mention this, but Frampton was zealous in this earlier action, and the Dorset historian Barbara Kerr credits this central role in suppressing Swing as in part shaping his determination to foil the new trade unions.

It is arguable how much of a break this was with the past, particularly as several members of Loveless' wider family were involved in the union movement. But what is clear, is that the fledgling movement terrified the establishment. Of great interest in this book is how Norman highlights the correspondence between Frampton and Lord Melbourne in London, which shows how Tolpuddle was seen as a key case in challenging trade unions across the country. It's clear that there was a conspiracy to frame the Martyrs, and they were victims, not of the law, but of a system designed to protect the wealthy.

Andrew Norman's book focuses on the individual lives and experiences of the Martyrs, including the later lives of five of the six in Canada. I was disappointed that there wasn't more on how the trade union movement mobilised nationally in their support. Norman points out that a few days after they were found guilty, 10,000 attended a protest meeting in the capital. It would have been fascinating to know more about this. Norman attributes the freeing of the Martyrs to the way that the government found itself exposed by allegations of "illegal oaths" by the Orange Order, and downplays the mass movement outside Parliament. The problem with this, is that it ignores the fact that without the mass movement there would have been no pressure on the government to bend under over the wider question. In fact, it's doubtful it would ever have received prominence, without thousands protesting and signing petitions.

That said, this is an decent introduction to the story of the Tolpuddle Martyrs, and the struggle that got them returned from transportation. This is, of course, in contrast with those who were deported as a result of Captain Swing. Hobsbawm and Rudé could only find two people who managed to return from exile in that case, but they didn't have a mass movement in England demanding justice. Such are the lessons of history.