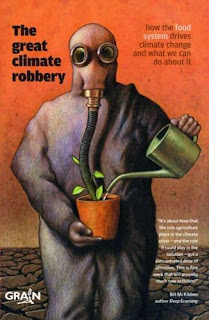 GRAIN is a non-profit campaigning organisation that supports small farmers, peasant movements and fights for a more socially just agricultural food system. It has been at the forefront of these movements and has produced some important studies into the nature of modern agriculture and how that impacts on farmers, communities and the wider ecological systems. As such this book is a welcome addition to the literature that is attempting to understand how modern agriculture drives climate change and is impacted by it.

Agriculture today is a prime driver of environmental destruction.


Food is the world's biggest economic sector, involving more transactions and employing more people by far than any other. These days food is prepared and distributed using enormous amounts of processing, packaging and transportation, all of which generation GHG emissions... With transportation accounting for 25 per cent of global GHG emissions, we can use the EU data to conservatively estimate that the transport of food accounts for at least six per cent of global GHG emissions.

GRAIN continue by highlighting the waste of the agricultural systems, the emissions from processing, packaging, deforestation, and way that the destruction of soil is helping driving climate change.


A wide range of scientific reports indicate that cultivated soils have lost between 30 per cent and 75 per cent of their organic matter during the 20th century, while soils under pastures and prairies have typically lost up to 50 per cent. There is not doubt these losses have provoked a serious deterioration of soil fertility and productivity, as well as worsening droughts and floods.... it can be estimate that at least 200 to 300 billion tonnes of CO2 have been released to the atmosphere due to the global destruction of soil organic matter. In other words, 25 per cent to 40 per cent of current excess of CO2 in the atmosphere comes from the destruction of soils and its organic matter.

GRAIN argue that what needs to happen is a complete transformation of the food system in a way that puts the "world's small farmers" back in the driving seat and limits the influence and power of the massive agricultural corporations that push fossil fuel intensive monoculture farming as the alternative. GRAIN writes that there are three shifts that need to occur:


The first is a shift to local markets and short-circuits of food distribution, which will cut back on transportation and the need for packaging, processing and refrigeration. The second is a reintegration of crop and animal production, to cut back on transportation, the use of chemical fertilisers and the production methane and nitrous oxide emissions generated by intensive meat and dairy operations. And the third is the stopping of land clearing and deforestation...

But this is not a manifesto for "eat local". GRAIN understand that the changes needed involve the complete transformation of the food system and a struggle against the multinationals. This is not simply about individuals eating better, but requires "a structural scaling back of 'Big Food' and 'Big Retail' and those who finance them". Interestingly GRAIN also do not fall into the trap that has become all to prevalent within the environmental movement recently in arguing that everyone needs to stop eating meat to save the planet.

The scale of corporate influence is enormous. Since the 1960s, an area roughly the size of the European Union has been given over to just four crops, soybean, oil palm, rapeseed and sugarcane. But these crops are not about feeding people, they are about maximising "return on investment". In contrast, despite the pressures from corporate farming, small farmers continue to provide most of the food that people need. Partly because they are more productive when compared to monocropped giant farms, and partly because they are focused on feeding local communities, not maximising profits. GRAIN conclude:


The data shows that the concentration of farmland in fewer and fewer hands is directly related to the increasing number of people going hungry each day.

Most of this book focuses on the way that the interests of the food multinationals is facilitated and protected by national governments and international legislation. An emphasis on the increase in free trade and removing barriers to the operation of corporations dominates legislation such as TTIP. The World Bank, the IMF and other institutions have driven policies in the last forty years that have decimated small farmers in the interests of multinationals. In several of these essays GRAIN explores how this has taken place. Excellent chapters on REDD+ and GMOs show how feeding the world and reducing emissions has become secondary to profits. Indeed, despite claims that neo-liberal policies would reduce malnutrition and ensure food security, the opposite has happened:


global supply chains make consumers more susceptible to food contamination. A small farm that produces some bad meat will have a relatively small impact. A global system built around geographically concentrated factory-sized farms does the opposite: it accumulates and magnifies risk, subjecting particular areas to industrial-style pollution and consumers globally to poisoned products.

This book covers an extraordinary amount of ground, and my copy is covered in highlights and pencil markings. In terms of a polemic against the role of corporate power in the agricultural system, and an emphasis on the importance of bottom up farming, it's one of the best I've ever read. I did feel that it was limited in an argument about what can be done. For instance, I felt that some more detailed examples of the way that, even within the limits of the capitalist system, peasant struggles for food sovereignty and over land ownership can bring real victories would have been useful. Ending corporate influence will however mean much more than a few such victories - it will mean dismantling the multinationals and the governments that support them. Campaigning against TTIP and other trade "deals" is important, but we must go further. Increasingly as capitalism leads us towards climate disaster, our movements will have to challenge the system, rather than just the symptoms. This is the logical conclusion of GRAIN's detailed work, but it isn't reflected within the book.

I wish I had had a chance to read The Great Climate Robbery when writing my own piece on Food, Agriculture and Climate Change for International Socialism. In that piece I tried to explore further how workers and peasants might struggle for a more sustainable food system. GRAIN's work underlines the importance of that struggle and I encourage people to read it.