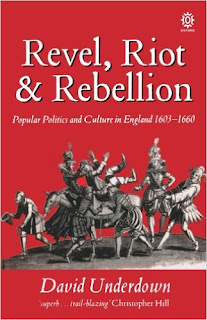 The English Civil War was not simply the story of a series of sieges, set piece battles and skirmishes. It was a revolutionary conflict that split England many ways. Large numbers of books have been written exploring the way that the War and Revolution allowed an explosion of radical ideas and groups, involved the mass of the urban population in resisting the King and popular politics. Fewer however have explored the impact of those tumultuous years on the wider English population. David Underdown's classic study explores this topic and seeks to understand why it was that different areas of the population reacted in different ways.

Underdown argues that root of these different regional reactions lies in the differences between arable areas of England:


By the early seventeenth century important social differences were emerging between English pasture and arable regions. These in turn were reflected in cultural differences which help to explain the varying responses of those regions to civil war. Political attitudes are a part of culture, part of that 'historically transmitted patter of meaning embodied in symbols... by means of which men communicate and develop their knowledge about and attitudes towards life'.

This is the basis for Underdown's argument, and I'll have more to say on this in a moment. But it is worth noting that whatever you might think about the author's thesis, his study of the cultural changes, political attitudes and social life of the population is both encyclopedic and extremely illuminating. This was a period when established ideas of religion, politics and sexual roles were being strained and even breaking. In his discussion on the increasing concern with "unruly women" shown in local court reports from 1560 to 1640, Underdown notes:


It may seem odd to place the witch in the category of independent women, the typical suspect being usually old and powerless. But wichcraft fantasies were often a response of the powerless to isolation and oppression that were both social and sexual in origin. Parallels between witchcraft and scolding were not lost on contemporaries: the chief fault of witches, Reginald Scot observed, 'is that they are scolds'. The scold who cursed a more fortunate neighbour and the witch who cast a spell were both rebelling against their assigned places in the social and gender hierarchies.... evidence suggest[s] that a perceived threat to patriarchal authority in the years around 1600 was a major feature of the 'crisis of order'.

This is just one of many fascinating insights into the changes taking place in English society during the period covered. But lets' look a little more at what Underdown argues about the differences between the two regions.


The parishes of the clothing districts were more divided and less cohesive than their counterparts in other regions - divided physically (because they were so often larger in area), divided socially (because of the influx of poor), and divided in religion (because of the frequent presence of knots of Puritan reformers)_. Their parish elites had the same preoccupations with order - with achieving a reformed, disciplined, industrious community - as their urban counterparts... And in the clothing region the elites were more often united.


But if we look beyond these local variations, the overall patterns of regional contrast ar clear enough. The cultures of the major regions were diverging as their social structures were diverging, during the half-century before the civil war. In the clothing parishes of the Wiltshire cheese country and in Somerset north and east of the Mendips, the those of Puritanism was coming to be shared not only the substantial middling sort, but by man of the smaller property-owners and better off craftsmen as well. They never succeeded in eliminating completely the disorderly recreation still popular among younger people and the poor, but because of the breadth of Puritanism's appeal they were more successful than their less numerous, more isolated counterparts in more traditional areas. Even the undisciplined poorer folk of the cheese country, their rituals suggest, shared some elements of the more individualistic outlook of their superiors, through they also retained highly conservative notions of how society and the family out to be ordered. In south Somerset, Blackmore Vale, the Wiltshire and Dorset downlands, a less polarized, more cohesive, somewhat more deferential form of society survived. So, inevitably, did older conceptions of good neighbourhood and community and the festive customs in which they were articulated. These cultural contrasts are essential to an understanding of popular politics...

As these long quotes suggest, Underdown is arguing that the development of new forms of agriculture and the diverging types of production between regions was shaping new ways of viewing the world and leading (at all levels in society) to different ideas, customs and culture. By the time of the Civil War, with society in general polarising (and as Underdown notes the common people 'taking sides')  these cultural differences settled out into antagonistic positions. In the more conservative areas Royalist ideas and support flourished, and in others support grew for Parliament. Underdown is careful not to suggest that this was either automatic, or completely uniform. Local differences (such as the political interests of a local landlord, the attitude of a respected clergyman or the behaviour of an invading army) made a real difference.

Strangely though Underdown argues that the different cultures of the regions, "related to different stages of social and economic development... does NOT imply a reductionist resort to economic determinism" (my emphasis). He then shows how some towns and areas which had more developed clothing industries were traditionally culturally conservative. The problem I think is that Underdown's ideas work when (in his words) areas are "viewed from a greater distance". The more focused the study becomes the more opportunity there is for localised variation. There was a constant dynamic between local ideas and national politics.

So Underdown's main thesis is not without value, but it was hard to isolate precisely what he is concluding. Ultimately though, the end of the civil war period saw the growing breakdown of collective, communal rights and the growing domination of individualistic ownership of land and property. This process was uneven, drawn out and frequently resisted. While I found it frustratingly unclear in places, Underdown provides some stimulating ideas. Alongside this is a wealth of detailed information of particular locations and struggles which will provide the reader many fascinating insights.