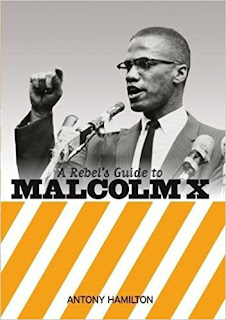 Millions of words and hundreds of books have been written on Malcolm X and the struggle for Civil Rights in the United States. In an era when #blacklivesmatter is an essential rallying cry for hundreds of thousands of people sick of institutional racism and the routine killing of black people by the American police, the lessons of the Civil Rights movement remain crucial.

Of all the introductions to Malcolm X few are as succinct and accessible as Antony Hamilton's new Rebel's Guide. He brilliantly covers the Civil Rights era, showing how Malcolm X's life was intertwined with the changes that were taking place. From Malcolm's early life in a poor black ghetto, where he experienced the violence of the racist state, to the growing Civil Rights movement which exposed the limitations of those who saw change coming from the US state itself, this book expertly captures the political changes that Malcolm went through as he first joined, then broke with the Nation of Islam.

There is no doubt that Malcolm's membership of the Nation of Islam was a key part of his life. But Hamilton shows how Malcolm's revolutionary politics led first to a break with the NOI and then, in the few months he had left before his assassination, a rapid development in his revolutionary ideas.

Central to this were his trips abroad, in particular his experiences of the anti-colonial and pan-African movements that were shaking Western Colonial rule in Africa and elsewhere. Despite the limits of these travels - Hamilton points out that "[Malcolm] was always in the company of national leaders or royalty and separated from ordinary people. His various  speeches and addresses were to academics in universities or governments" - Malcolm was exposed to new united movements that brought together many different people. This helped challenge his black-separatism, at the same time as fuelling his belief in the revolutionary transformation of society.

I hadn't realised the extent to which, in this period, the US left had helped with this. Malcolm frequently spoke on platforms with socialists and trade unionists, though it seems his understanding of socialism was shaped mostly by the idea of strong state ownership.


Swept up in a victorious atmosphere of African nationalism, Malcolm was propelled towards seeing socialism as the key to freeing Black people. He stated that 'you can't have capitalism without racism' and those who opposed racism and capitalism were usually socialists. However, the socialism which was promoted in the newly independent nations was a convenient way to describe their alliances with the Soviet Union in opposition to US imperialism... This guided Malcolm's idea of socialism and gave greater attention to the actions of new governments rather than to the heroic struggles of the working class.

Nevertheless, towards the end of his life, Malcolm was clearly moving in a more direction that was even more threatening to the US state. One of the great strengths of this book is that it shows how individuals like Malcolm X were shaped by the period they were in, and were constantly changing. Hamilton points out,


There is a common tendency to place Malcolm X and Martin Luther King Jnr in opposition to each other, one violent an the other peaceful. But this is too simplistic a view. Neither was static. The tactics and determination of both King and Malcolm were necessary components of the movement and both changed depending on the circumstances.

Had Malcolm X lived he would have continued to play a central role in the struggle against racism, but also one that linked this closely to the fight against capitalism, the system that breeds racism. As such his ideas and his life are very important to the struggles today, and this little book is a wonderful introduction to these.

Reviews of other Rebel's Guides