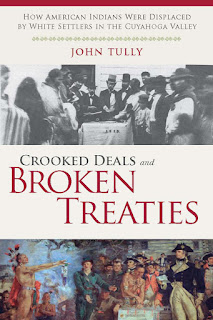 This short book is an excellent example of how large scale historical changes can be examined through the microcosm a relatively small geographical area. White settlers profoundly transformed the areas they arrived in. Before their arrival, these areas had been the domain of various Native American tribes who had used the land in radically different ways to the Europeans. The destruction and displacement of those tribes is a key part of Tully's story. As part of doing this the Europeans completely transformed the whole landscape.

One early traveller to the region, James Smith, who was a prisoner of one of the local tribes remembered seeing "black-oak, walnut, hickory, cherry, black-ash, white-ash, water-ash, buckeye, black-locust, honey-locust,sugar-tree, elm and white-oak... [and] 'large quantities of wild apple, plum and re-and black haw trees'".

This plethora of trees, was matched by a huge variety of other flora and fauna. But a century ago, the transformation had taken place, as one quoted account puts it, the


universal forest has been so far destroyed that only broken patches remain... These are now much exposed to the sun, winds and forests, that they have lost much of their verdant and luxuriant appearance. - The same exposure to the elements has... dissipated the rich native soil; and the beautiful investments of shrubs and herbaceous plants has been destroyed by repeated browsing and cropping of domestic animals.

Those who have read William Cronon's masterful account of the changes that took place in New England with European colonisation will see many parallels. In Changes in the Land, Cronon showed that ecological changes could not be separated from the way that the Native people were also destroyed. So it was in the Cuyahoga Valley - here, as Tully shows, the desire to farm land along the lines of European agriculture meant the destruction of huge areas of woodland and the destruction of animals (such as the great rattlesnake hunts which have driven some species to near extinction).

Alongside this was the systematic defrauding, exclusion and massacre of the Native people. What was also destroyed was a way of life completely different to that of the Europeans. These were people who, in the words of Henry Lewis Morgan about the Iroquois people, "practiced communism in living". The Delaware people who lived in this part of Ohio, were egalitarian, and inclusive: "every adult male and female member had a voice upon all questions". These communities were not Utopian - conflict certainly existed between some tribes - and Tully does not pretend otherwise. But their lives were completely different from those of the Europeans who came from a society obsessed with wealth creation. By contrast the Delawares, for instance, saw the whites as


Ungrateful, insatiable people, who though the Indians had given them as much land as was necessary to raise provisions for themselves and their families, and pasture for their cattle, wanted to still have more, and at last would not be contented with less than the whole country.

For European style society to triumph required the settlers to take control of the land. But they also had to destroy the Native Americans and their way of life. The "great slaughter" of animals by the settlers was matched by the destruction of the peoples who had lived their for thousands of years. In this, they faced resistance, in part because of the temporary alliance between the British and some Native American tribes. But mostly because the Native American people refused to meekly die.

It took the defeat of the British in North America for the area described by Tully to be completely opened up to European settlement. In fact, as Tully explains, one of the reasons for the revolt was that the British authorities had been preventing the "settlers' dispossession of the land and liberty of the Native American peoples". For Tully, the idea that the American Revolutionary War was just about liberty is one of the great historical myths as it helped to end the freedom of the indigenous peoples. While the British certainly didn't have a brilliant record in their treatment of the Native American population, they had helped restrict the destruction of the tribes in this region. The victory of the Revolution opened up the land and the whites moved swiftly to occupy it. As Tully explains,


Back east in the nation's capital George Washington and Thomas Jefferson advocated a softer approach. America's Manifest Destiny was to spread westward, but the Indians should be assimilated into the nation's social and economic life by accepting European doctrines of landownership and learning European methods of farming the land.

Washington and Jefferson may have hoped that this is what would happen. But they must have know that the reality would be forced eviction, fraud, violence and massacre. The details of the violence in Tully's account are deliberately shocking, as the author is writing in part to demand recognition of what took place and to recognise that, in his words, "justice demands the redress of the accumulated wrongs".

Exactly how this should happen, is as Tully points out "complex" and part of the point of his book is to teach a new generation of people of the need for justice. It is an admirable contribution, which deserves a wider readership than the Cuyahoga Valley population that it is clearly aimed at. For this reason a few maps would have been helpful. But this is a minor critique of an important book that everyone interested in history of the United States and the transformation that took place with the arrival of Europeans should read.