Eamon Duffy - The Voices of Morebath: Reformation & Rebellion in an English Village 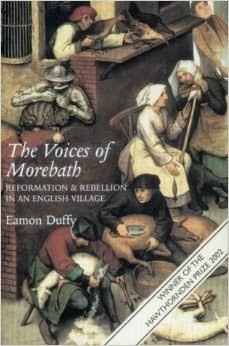 Eamon Duffy's classic book The Voices of Morebath is an extraordinary and unique study of Tudor society undergoing dramatic transformation. For 54 years Christopher Trychay was the priest of the tiny village of Morebath. For all that time he kept detailed records. Most of these deal with the financial dealings of the parish - the income and expenditure of the church, the costs of candles and repairs, the donations from parishioners and the cash given in their wills to help ease their way to heaven. But though most parish records like these are dry, Morebath's priest kept his records in detail - far more than simple columns of numbers. His notes were spoken from the pulpit and his records enable the historian to construct the detail of life in a village going through some of the most traumatic changes of its era.

Duffy's book is excellently written, but his historic analysis is also superb. He has an eye for detail and an ability to see through numbers to tell a wider story. Here is, for instance, his summary of how the church "ales", the periodic sale of drink to raise funds, were part of wider village life.


After the church, the most important building in the parish was the church house, also called the church ale-house. Located on the SE side of the churchyard, in the cluster of ten or eleven dwellings that made up the village centre or ‘Morebath town’ it was the parish’s place of public entertainment, a two storey building furnished with a fireplace and spit, with cups and platters and trenchers of treen [turned wood] and tin and pewter: its trestle tables and tablecloths were sometime loaned to parishioners for events like weddings. Visiting merchants could hire a ‘sete’ or stall there to sell their wares, like William the merchant who had a ‘standing’ in the house in 1535, or the Tiverton ciderman John Walshman, who sold cider there for four weeks in 1538. The ‘pleers’ [players] who paid 12d to the wardens to perform in Morebath at Easter 1533 may well have been hiring the church house. Above all, the fund-raising banquets known as church ales, organised by the churchwardens and by the Young Men of the parish (the ‘grooming ale’), and which between them provided the bulk of the parish’s income were held here. Beer brewed or bought by the wardens and food cooked in the church house itself were sold and served at these ales: in 1527 the menu at the high wardens’ ale included a roast lamb from the church flock, which had accidentally bled to death after being castrated. By Elizabeth’s reign and perhaps before, minstrels and a local man, John Timewell the harper were being paid to entertain the drinkers. Parishioners were expected to attend and spend their money, and official representatives came and supported from surrounding parishes, a favour which had to be returned when the parishes concerned held their own ales.

If Dufy's book only concentrated on village life it would be interesting in an of itself. But at the core of his work is an examination of the impact of the religious changes that began under the regein of Henry VIII, continued under his son Edward, and were reversed by Queen Mary and then further continued and extended under Elizabeth.

Henry's break from Rome had an enormous impact on the whole of English life. Even a village like Morebath, with barely 150 inhabitants had to adapt and change. New bibles and prayerbooks were introduced, icons and statues had to be removed. Funds could no longer be raised to pay for candles under the parish's statue of St Sidwell. Through all of this Trychay's metivulous records note the impacts of the changes and in particular the funding shortfalls as the parish can no longer sell ale, or raise funds in ways that it used to.

The changes provoked anger, frustration and out-cry. In 1549, Duffy shows how Morebath sent five of its young men to join the big Western Uprising that rebelled against the new prayerbooks. Giving money from church funds, the parish's sons left to join the rebel camp near Exeter. Several of them died in the massacre of the rebels. While Trychay may come across as a pompous self-important man at times, he clearly loved his flock and cared deeply for them. As Duffy notes,


He had been the spirit of Morebath, the chronicler of its dramatic and sometimes tragic share in the religious revolutions of that turbulent age, and the custodian of its blunt attitudes and salt speech. He had baptised their children, buried their dead, married every one of them. He had been the guide of their pieties, he had almost certainly encouraged their sons into rebellion, and, when the time came, he had eased them into a slow and settled conformity to a new order of things.

Duffy's book is an excellent study of an English village in a period of transition. It is happy conincidence for us, that Morebath was so close to the historic events of 1549 and that they were detailed by such an obsessive figure as Christopher Trychay. Duffy notes that a "study of the Reformation in an Essex or Suffolk village... where many ordinary men and women welcomed the Protestant gospel... would look very different." Nonetheless, this is an important insight into the impact of that change and the way that ordinary people in one part of England responded. That Duffy puts it all so well into context means that this book is a triumph for both the casual and academic historian.
Posted by Resolute Reader at 7:00 pm