Neal Stephenson - The System of the World 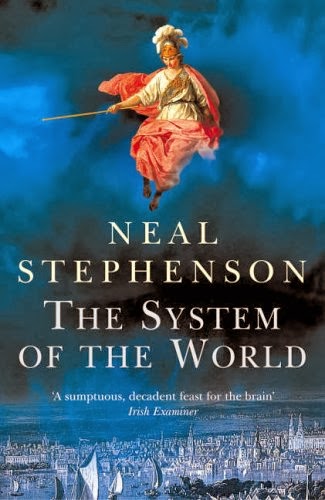 Finishing Neal Stephenson’s Baroque Cycle feels akin to completing a long voyage. This is not simply because the trilogy weighs in at nearly three thousand pages; it also reflects the enormous scale of the work. Covering some of the most turbulent decades of European history, we see the end of the old feudal order being replaced with a mercantile, capitalist system. The kings and lords are pushed out and replaced, particularly in England, by the coiners, the merchants, the investors and the traders. This is a set of novels about the capitalism becoming entrenched.

Set mostly in England then, System of the World book covers the machinations of those caught up in the whirlpools and eddies of the time. Many of these hang around the court – the post Civil War court – aware of their diminished power, but clinging on to tradition in the hope of wealth, prosperity and promotion.  This final volume brings it all to a head. If the first volume, centred in large part, on the Royal Society dealt with the transformation of culture and science in the new era, volume II examined the impact upon the rest of the world. There we saw South America being stripped bare of precious minerals, slavery and empire.  Our heroes have traveled the globe now and in the final volume they congregate back in England. Some of them attempting, through the introduction of forged coins, to debase England's currency, undermine the economy and open the door to counter-revolutionary foes. Others to stop them, but most of them trying to make a future for themselves by fair means or foul.

The System of the World is the climax to a string of different stories, linked and inseparable, but each with their own characters and subplots. As is the nature of climaxes there is a lot of energy, excitement and drama here. Stephenson ties up lose ends and characters at the same time as taking the story forward. Unusally for the trilogy I found it slightly over long – in the early volumes the philosophical detours that took in science and alchemy, royal intrigues or historical information here seem a distraction. The book could have been a hundred or so pages shorter without losing anything.

Ultimately the book comes down to the fates of the principle characters we met in the early pages of volume one.  Jack Shaftoe, King of the Vagabonds, faces his final and greatest challenge after breaking into the world’s greatest prison. Eliza, the woman he has loved for three decades, is pulling a myriad of strings to ensure her plots and sub-plots work out. Scientists like Newton, Leibniz and the fictional Daniel Waterhouse are on the brink of new discoveries that will open up the universe to human intellect. But their fire and steam machines are also set to open up the world physically to the search for profit. The era of the human slave may be ending in some parts of the world. That of the wage slave and machine is dawning. A new World System as the title, after Newton, indicates.

Stephenson’s trilogy is a masterpiece. Each volume different yet together making an enormously satisfying whole. I marveled at the author's knowledge of the period, his grasp of science and his sense of historical change. Despite the characters frequently being kings, great men, landowners, famous scientists and merchants, the real heroes, drawn in loving detail are the ordinary people of the 17th and 18th century. So I recommend these books to all those who like their fantasy sprinkled with historical change, science, improbable adventure and the dirty streets of London.

Stephenson - Quicksilver
Stephenson - The Confusion
Posted by Resolute Reader at 11:12 am