Brian S. Roper - The History of Democracy: A Marxist Interpretation 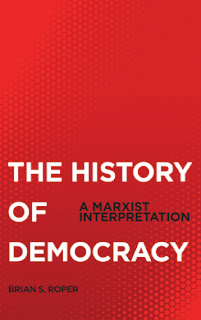 Just what "democracy" is has varied enormously throughout history. In the developed world we are told that "our" democracy is the envy of the world, yet as this new history demonstrates, at various times in the past people have had very different and often far more expanded franchises than we have today.

Indeed modern representative democracy is actually very limited. You only have to look at the way that the 2008 economic crisis was caused by completely unaccountable people. Bankers whose actions might have consequences for millions of people were completely unaccountable to wider society. Or, as Brain Roper points out, you could examine the 2004 US election were "business contributed $1,503 million to political parties compared with $61.6 million from trade unions". More recently you might muse on the fact that almost no-one in Britain voted for a Tory-Liberal coalition, yet the inadequate election system we have produced just that.

Roper begins his survey of the history of democracy with the ancient world. He argues that ancient Greece's democracy was surprisingly advanced. In fact, "for the first and only sustained period in history the producers or labouring citizens ruled." Citizens he says, "faced no major obstacles to significant involvement in public affairs based on social position or wealth". Though children, women or slaves were of course excluded. Nonetheless, this is far in advance of the rights of many early democracies such as Britain, which only extended the franchise to women in the early 20th century. Roper is absolutely correct to argue that:

I stress this because one of the important themes of Roper's book is not just that "democracy" changes through history, but that it does so based on particular historical circumstances. With the decline of ancient Greece and the Roman Republic, Roper argues that democracy effectively disappeared and it was only with the revolutionary struggles against feudalism that democracy reappears. This democracy then must itself be struggled for and extended.

At the heart of Roper's book is an examination of how this process takes place. He looks in detail at three bourgeois revolutions - England, America and France to try and understand how modern states appeared and how democracy became central to them. What might be termed bourgeois democracy is a direct product of these revolutions, in particular the American Revolution. Roper examines how the victorious American bourgeoisie constructed a democratic system that both protected the status quo and limited the potential for movements from below to challenge their authority. It was a democracy that had protecting property relations at its core.

But Roper doesn't ignore another aspect to these movements, which is the way that in revolutionary struggles democracy from below appears. During the English Civil War for instance, the mass of the population that took part in the fighting began to develop its own ideas for how society should be run. The Putney Debates in 1647 were an example of representatives of different social forces within the revolution trying to lay out their own visions of how people could partake in society. The more radical elements were destroyed by Cromwell, but the episode serves to show that the democratic traditions that came out of the bourgeois revolutions were not automatic. Instead they represent different class interests.

The strongest sections of this book are those where Roper shows how revolutionary movements throw up the potential for new forms of participatory democracy in the modern world. In particular he looks at the way the Paris Commune demonstrated to revolutionaries like Marx and Engels how a socialist society might be organised, based on representatives paid the same rate and working people and accountable through recall by their electors. Roper quotes Marx's pamphlet, The Civil War in France:

"[The Commune was] a thoroughly expansive political form, while all previous forms of government had been emphatically repressive. Its true secret was this. It was essentially a working-class government, the product of the struggle of the producing against the appropriating class, the political form at last discovered under which to work out the economic emancipation of labour."

The second example that the author discusses is the Russian Revolution. This is important he argues, because "it showed that it was possible for the working class to take power and run society." In a few pages Roper discusses the successes of the revolution and the functioning of the soviets, the gatherings of elected representatives that both led the revolution and then began to re-organise society. He also then shows how the revolution was isolated and destroyed by the rise of Stalin and the bureaucracy.

It is easy to critique democracy. After all, democracy fails to deliver economic or political justice for the majority of those within society. But such criticisms are not necessarily revolutionary. The Marxist critique outlined by Roper is important because it points the way forward, to a society where democracy is based upon an entirely different method of organising society. Under capitalism he points out, democracy can never work properly because society is based on the fundamental antagonism between two classes, the exploitation of one by the other, true democracy can only flourish when this antagonism is destroyed.

While Ropers' book is excellent there are a number of criticisms I would make. Firstly Roper concentrates very much on democracy within class society. To this end he ignores the democratic decision making processes that must have existed within pre-class societies. Hunter-gatherer communities have frequently been shown to have high levels of participation in decision making.

Secondly, Roper argues that feudal society was fundamentally undemocratic. This is absolutely right. There was a strict social hierarchy that rested on brute force. Yet within feudal society there were, on a very localised level, often some examples of democracy. Peasants in feudal villages often met annually to redistribute strips of land. Another example might be the daily "parliament" of the community on the island of St. Kilda. We should be wary of arguing that this implied there was any sort of democratic base to feudalism, but it does demonstrate that once again ordinary people did try to organise to improve their lot.

Finally Roper quite rightly argues that democracy is a product of revolutionary times and that we see the best, participatory democracy evolve during moments of revolutionary struggle. This is not just a product of this high points, but also of most working class struggles - at the lowest level, the "strike committee" is one example.

These criticisms aside, Brian S. Roper has produced a useful and interesting over-view of the history of an idea. It is one that will be useful as we try to understand the processes taking place around the world, particularly in the Arab Revolutions, as millions struggle against dictators, for democracy, freedom and social justice.

Foot - The Vote
Vallance - A Radical History of Britain
Posted by Resolute Reader at 7:41 pm

A brilliant review! This book seems to explain various problems concerning democracy, which we confront today...for example the limitations of modern representatitve democracy, why democracy cannot work properly under capitalism etc. This review also directs our attention to ancient Greece's democracy, several revolutions such as the American Revolution, The English Civil War and the Russian Revolution... so that we can think of the close relationship between the revolution and democracy...Thanks for giving me a great opportunity to think about these important issues.