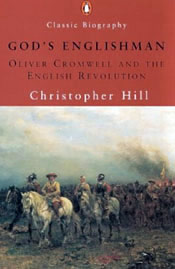 Christopher Hill's biography of Oliver Cromwell is less of the history of the man, and more a history of the world that shaped him and was shaped by Cromwell's life. As Hill points out at the very beginning of the book, the first forty years of Cromwell's life a "tangled knot of problems was forming which was only to be unravelled, or cut through, in the revolutionary decades 1640-60".  In this "decisive century in English history", the "decisive figure" according to Hill, was Oliver Cromwell. Thus this book contains very little about Cromwell's detailed life (his children and wife get a bare couple of mentions for instance) and much more about the changes going on in English society.

The first couple of pages of the book begin with a beautifully written summation of the changes taking place in Europe during the sixteenth and seventeenth centuries. These were decades when fundamental changes in the economy and politics of Europe were beginning to reshape the old feudal order. These changes seemed minor - about the rights of people to trade without interference, about tax levels, and about the balance of power between king and parliament. But together they added together in ways that began to fundamentally shift the most established ideas of society. In particular, in England, this meant whether or not the king had the right to rule over everyone, simply as a result of the position given to him on account of his birth. The consequences for Europe were large, but in England they were the greatest. The revolution that Cromwell was a central figure of, "ensured that henceforth governments would give great weight to commercial considerations. Decisions taken during this [17th] century enabled England to become the first industrialised imperialist great power, and ensured that it should be ruled by a representative assembly".

Cromwell's role in this was central. The man himself had little political understanding. His instincts stemmed from his own social and religious position, and Hill spends some time developing the readers own ideas of what a Puritan in Cromwell's position would have believed about the world he lived in. Much of Cromwell's early life was undistinguished, though once he became a significant landowner he was able to play an increasingly important role in debates inside and outside Parliament.

Cromwell's great strength seems to have been the ability to hold together a coalition of very different parties. The parties in this sense are not political ones in the way we know today, rather the representatives of different social trends and forces in English society at the time. The radicals of the English Revolution being in the same camp as the forces of the emerging Bourgeois made for an uneasy alliance, but they were united in their desire for change. What that change was, was open to question and Cromwell was able to offer much to both sides, tacking one way and the next in order to hold the coalition together. Cromwell was clear that he wanted a world where democracy was not open to all, only to those who had property. In this sense, he aligned himself far from the Levellers and Diggers who argued for a much more democratic rearrangement of society. But Cromwell also realised that he needed this radical vision of change to inspire the "russet coated" gentlemen to fight against the King.

Cromwell didn't start out wanting to commit regicide, this was forced upon him by the reality of revolution and civil war. But once the King was out of the way, Cromwell moved quickly to strengthen the position of the new ruling class, and this meant the destruction of those social forces that threatened the new, bourgeois order. Hill portrays Cromwell's later trajectory, from military leader to Lord Protector, not as a personal voyage for power, but as a attempt to shore-up the new order against internal contradictions. It was certainly not automatic that the revolution would not lead to the re-establishment of the monarchy, and Cromwell's struggle to prevent this meant the imposition of dictatorship. When the monarchy did return, it was in a subdued and weakened form, that was never able to regain its old position without facing the prospect of further revolution.

Hill finishes the book by focusing on the ambiguous nature of Cromwell to those who came after. Today, he is both the man who cut the kings head off, and the person who ordered the death penalty against the Levellers at Burford. He destroyed the people of Ireland in the name of progress, yet destroyed a monarchy in the interests of a more representative democracy. He championed the rights of those resisting enclosure early in his career, and by the end was encouraging further enclosures of land for the wealthy.