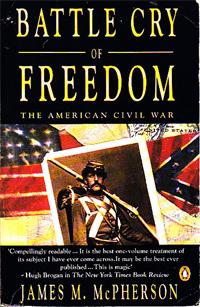 In the introduction to this volume the series editor feels obliged to justify the length of the work itself. He points out that almost every other treatment of the American Civil War requires multiple volumes. James M. McPherson's book is compressed into a single volume, albeit of almost 900 pages and is lauded on the cover as "the best one-volume treatment of its subject". This obsession with size is a little strange, but nonetheless the work is an astounding piece of history. McPherson has skilfully combined what seems the key features of the events leading up to and during the Civil War and woven them together with a detailed, but clear analysis.

I approached the book as a new-comer to this period of American history. With only a haziest grasp of some of the names and issues - Lincoln, Slavery, Confederacy and places like Gettysburg. I'd certainly recommend the book to someone trying to get to grips with the period. McPherson assumes nothing and if on occasion his treatment lacks enough detail, this is only for reasons of space. His detailed footnotes surely point the scholar to further reading.

McPherson begins with an analysis of the situation on the eve of war. The United States appears very much as a collection of diverse states, to a certain extent in competition with each other and lacking it appears in a sense of collective identity and ideology. At the heart of this was the growing divergence over the question of Slavery. For the Southern States the question was one of survival - without this aspect to their economy, they would fail and to the North, increasingly for large numbers of people Slavery was an abhorrence that should be ended.

McPherson deftly describes, sometimes in painstaking detail the growing confrontation between the two sides, and the great rainbow of opinions between the extremes. From a layman's point of view it becomes clear that a confrontation over the question becomes inevitable at a certain point. For the United States to survive as a whole the question of slavery has to be resolved, there cannot be a compromise. Northern Capitalism is increasingly based on free labour, Slavery anywhere in the US undermines this. In the South, the opposite is true. The capitalists there want to continue in the old ways, and the northern methods of making profits undermine their ability to benefit economically from slavery.

War, once it comes, is appalling brutal. The earliest of battles were fought in the old ways, men charging fixed positions, defended by soldiers with muskets. The heavy, slow ammunition causing horrific wounds. Its in this sort of discussion that McPherson's scholarly work really shines through. Detailed analysis of the war is one thing, but the social consequences, such as the drafting of women on both sides to nurse the wounded is not left out. Just as women entering the workforce in Europe during World War I had important social consequences so did their involvement at this point in US history.

My crude understanding of the war had lead me to believe that the North won on the back of its economic and industrial superiority. I was surprised to find that the North came very close on a number of occasions to losing. In part this was due to military ineptitude (there was plenty of this on both sides, particular from senior commanders). Though another important factor was the inability from both sides, but particularly the north, to press home military advantage. On at least two occasions the north could have finished the main bulk of the south's forces off on the battlefield but held back, letting them fight another time.

One of the strengths of McPherson's analysis is that he understands that everyone involved in the war was going through change throughout the conflict. The war began as a war to maintain or restore the Union. It ended as an all-out war to end slavery. Many of the military leaders in the North were prepared to take the first, but not the second. Their unwillingness to destroy the enemy was based on their unwillingness, in the final analysis, to end slavery. Lincoln himself optimises this change. While slavery is the dominant question in the run up to the war, he himself only belatedly comes to the question of emancipation. Indeed, before making this his public position he goes through a whole host of other positions first - partial emancipation, a black homeland in South America and so on.

As it becomes clear that the war must be fought to a military end it also becomes clear that this means the destruction of the institution of slavery in the south. The war becomes a revolutionary conflict - the North has to destroy the basis for the south's old strength. This is why the question of the involvement of black people in the North's military forces is so important. It is both a recognition of the fact that the North needed to mobilise everyone, and as a symbol of what the war has become.

This review cannot hope to do justice to McPherson's brilliant book. There is so much inside - from the naval war, which saw the use of iron-clads for the first time, to the role of the United Kingdom and Napoleon, as well as the support from the ordinary people of Britain to the anti-slavery fight. The military history is fascinating too. Wars and battles cannot be separated from the social situation in which they are fought, and the descriptions and details of the conflicts are fascinating for the insights into the minds of the commanders and the ordinary troops. It is notable that the war bridged a period of military history; it began in the style of the Napoleonic conflicts and ended with the brutal attrition of trench warfare.

The United States like most nations is contradictory. Its leaders spoke of freedom but its very existence was based on the destruction of the country's aboriginal people. Indeed many of those who fought slavery in the South, in turn took part in the final destructions of the Native American tribes.

The American Civil War was the turning point for US history, the victory of the North was the moment when modern capitalism became free to develop as it needed, no longer restrained by the last vestiges of the old order. The stage was set for the twentieth century. McPherson's book tells this story brilliantly and deserves to be read and re-read.
Posted by Resolute Reader at 9:52 pm

Sounds as though he deserves his impressive reputation. Did he draw notice to the idea that the North and South were fighting the same war for different reasons -- one, to restore the Union, and the other to protect slavery from northern interference?

I agree with you. McPherson's book certainly deserves its reputation. The 'suggested reading' section alone is a great introduction, the book itself remains an indispensable starting point for anyone looking to learn about the Second American Revolution. For those who like the narrative of battle Bruce Catton's series written a generation before McPherson is splendid and has the advantage of being decidedly biased toward the North rather unlike Shelbey Foote's Southern apologia.