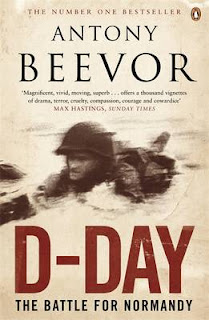 Antony Beevor's latest book is an excellent addition to his earlier works, particular those on the battles for Stalingrad and Berlin. In some ways for this reader, coming from Britain, it's a book that is closer to home. After all this was a battle fought by Allied soldiers who were either British or invading the continent from Britain.

The battles themselves are described in gruesome detail, as is the nature with Beevor's writing. He doesn't shirk from the horrors of battle, nor does he fall into the trap of describing a generic "bad" enemy and "good" allies. So we hear about the killing of POWs by the Germans and by the British, Canadian, American and other allied forces. Of course, Beevor is quick to point out that there was a particular brutal response from some of the German forces - the massacres of entire villages in response to resistance fighters for instance - by the SS in particular.

At the top of the story is the relationships between the various allied leaders. Here the differing styles and emphasises has the most impact. It's clear that there were real personal clashes between say the Americans and British had a lasting impact. The British General Montgomery comes across as a real barrier to the further development of the front in the crucial weeks after the invasion. Beevor does point out that Montgomery took on the hardest and most entrenched enemy forces, and the contribution of the British certainly helped the Americans elsewhere. But there is no doubt that there is a lasting anti-Montgomery prejudice from the official American military histories.

The liberation of Paris and the particular role of the insurrectionary resistance fighters in the capital forms the end of the chapter. The story of the particular factions involved in this is fascinating, as is the clear fear from the allied leaders of a Communist inspired revolutionary take over. Here Beevor is astute enough to also argue that this was a fear for Stalin, who had now moved so far from the politics of international revolution that he had no interest in such an outcome on the Western Front.

Beevor's conclusion is the invasion of Normandy was a crucial point in World War Two. Not particularly because it changed the outcome of the conflict - that had already been decided outside Stalingrad, but because it allowed the United States in particular, and to a much lesser extent Britain and France a voice in the post-war carve up of Europe. This is an important argument, challenging the more common idea that it was the West that won the war. It is because he makes such realistic appraisals, despite their likely unpopularity amongst sections of his readership, which makes Antony Beevor such an excellent military historian.
Posted by Resolute Reader at 9:37 pm

i started to read this book and found that it resembled stephen Ambrose's description of the American 101st Airborne Division,
especially their equipment or how much equipment that they had to carry in to battle. As he is I think a British author, surely he could have written about the British 6th Airborne Division as I think I and many other readers have had a belly-full of what the Americans did.

In my edition, pages 51-60 (the first 10 pages of the section on the Airborne landings) deal with the activities of the British 6th Airborne Division and their landings on Normandy. I certainly didn't get the impression that Beevor devoted more or less space to any particular unit or national army in the book.

This sounds like a very interesting book. I'm a total WWII buff, so this looks to be right up my alley!

I actually got a free chapter of a book about Gen. Omar Bradley the other day that's really good so far. Here's a link if you wanna check it out- http://www.regnery.com/books/omarbradley.html