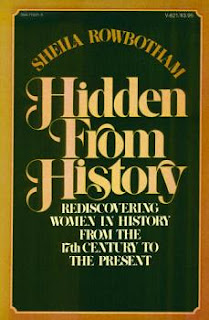 This is no doubt one of the classic books of working class history. First published in the early 1970s though, it's groundbreaking aspect was too look at the "hidden history" of the struggle of women for equality and rights, in the context of the broader working class struggles and movement.
As such it takes on some uncomfortable truths. Despite the fact that at least on the surface the labour movement in the UK (and one hopes much wider afield) supports the notion of women's equality, the right for women to play a full role within the labour movement and wider society, as well as equal pay, maternity rights and access to childcare etc, this wasn't always true. Indeed, it's not always true now.
Rowbotham shows how early pioneers of the notion of women's rights didn't always meet with a friendly reception from their male contemporaries. Often for instance, this was from organised workers who were worried that women would undermine male pay levels or workplace organisation.

But also it was true within personal relationships - Rowbotham shows how women often found their socialist partners would, once married, revert to the same expectations of the role of women in the family as their bourgeois contemporaries.

But the author doesn't try to find some natural antagonism between men and women, she places such relations firmly in the context of a system that saw both the need to divide and rule, and to place the burden of raising the next generation of workers on the woman.

The struggle for the right to vote for women forms the backdrop to most of the book, though the turning point comes with the first world war, with women entering the workplaces in large numbers for the first time. Even though this ended to a certain extent with the return of peace, the fact that women had taken on jobs seen as being exclusively male fundamentally shifted social attitudes. This even survived the mass unemployment of the 1930s. Further struggles were ahead, ones that weren't simply about economic equality, though these were important. But struggles over childcare, the right to abortion and access to contraception were ones that eventually became those of the whole movement.

Rowbotham's book finishes in the 1930s. The later struggles are no less important, and this early work of hers has made me keen to search out her more recent work.
Related Reviews

Barnsley - Breaking Their Chains
Orr - Sexism and the System - A Rebel's Guide to Women's Liberation
Dee - The Red in the Rainbow - Sexuality, Socialism & LGBT Liberation
Posted by Resolute Reader at 5:59 pm